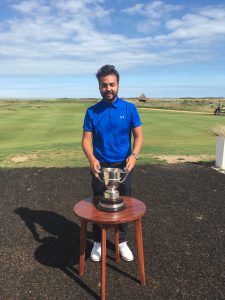 Manston Golf Centre’s PGA Trainee Gavin Webb is the newly crowned PGA Kent Open champion. He carded a six-under-par 138* at Prince’s to claim the third event in the Virgin Atlantic PGA South Order of Merit and a cheque for £2,000.

After playing in the first professional event to be held over the re-imagined Himalayas-Shore layout, despite being three behind going into the last round it was Webb who lifted the PGA Kent Open trophy.

Webb is also a member at Prince’s, and he commented: “Having shot a two-under-par 70 in the first round, I was happy to be just three shots off the lead. I had relatively low expectations for the final round but reached the turn in 35 to be three-under overall.”

He added: “Despite a two club breeze I played really well through the back nine with birdies at the 14th and 16th. My six iron to the 17th missed the green but I chipped in for a birdie two and parred the last for 68. Even so, I was still expecting someone in the last group to beat my six-under-par 138, so to secure my first Order of Merit title is fantastic!”

Roehampton’s Billy Hemstock led after round one with an impressive five-under-par 67, closely followed by Richard Wallis and Jordan Godwin on 68. At one-over-par the cut left 39 professionals and three local amateurs competing in the final round.

In his first PGA tournament as a professional, Prince’s former junior and new PGA Trainee Jordan Loft shot 67 for the best round of the last day, finishing one short and sharing the runners up spot on 139 with Alexander MacGregor (Addington Court), Billy Hemstock and five time Virgin Atlantic PGA South Order of Merit champion Richard Wallis (Canterbury).

Robin Orchison capped a fine day for the Prince’s members by taking the Leading Amateur prize with a two round score of 148.