Huizing back in the winner’s circle in Jordan 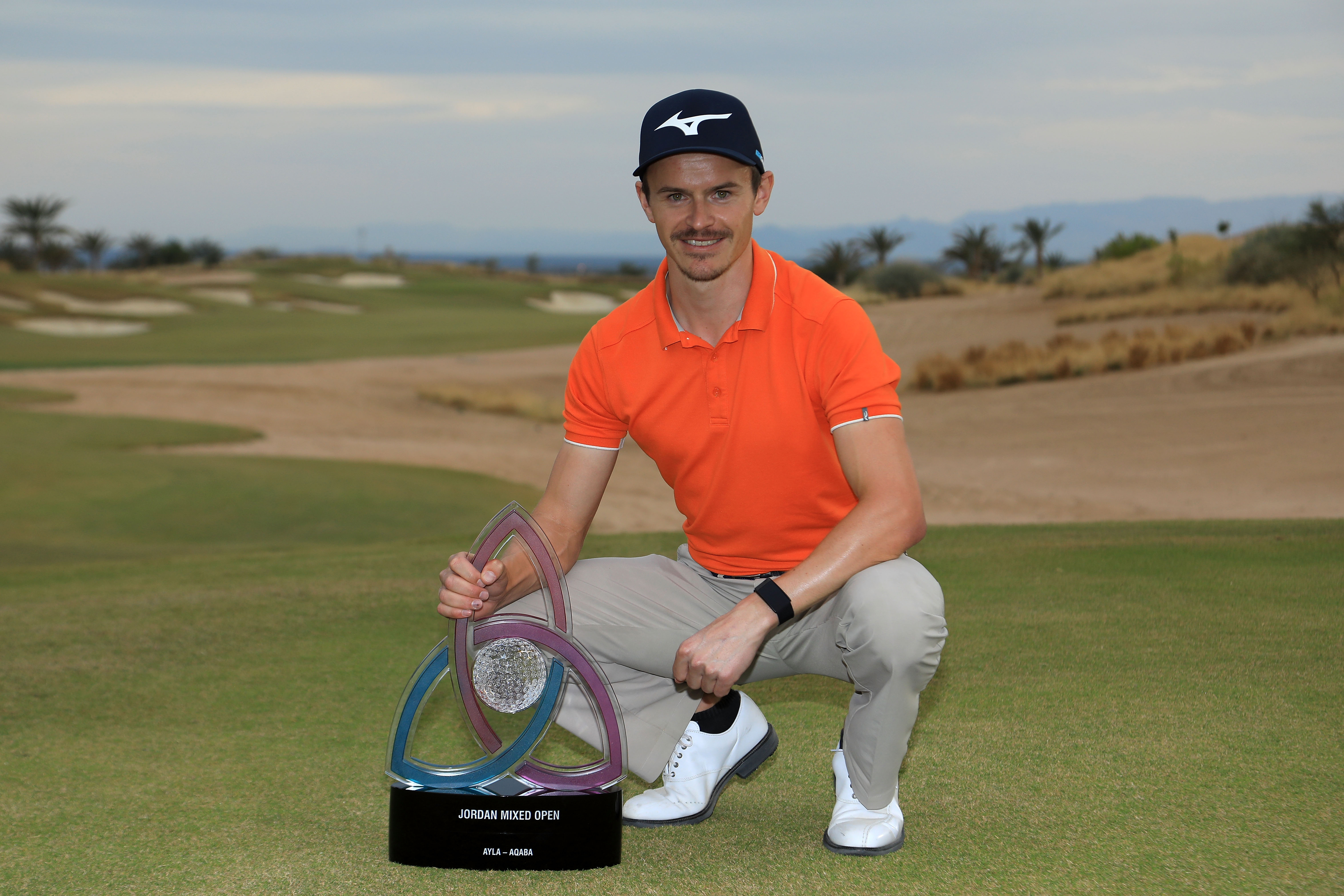 DAAN Huizing made golfing history by becoming the first player to win a full-field mixed professional tournament with his triumph at the Jordan Mixed Open.

The Dutchman began the final round at Ayla Golf Club two shots behind overnight leader Meghan MacLaren, who opened the world-first tournament with consecutive rounds of 65 to get to 14-under par.

MacLaren started the final day strong, carding two birdies on her first three holes, but Huizing was able to slowly chip away at the Englishwoman’s lead, and by the time the two golfers reached the 13th tee, they were deadlocked on 14 under par.

The stage was set for a never-before-seen battle down the stretch between a male and female golfer competing for the same first prize.

In the end, it was Huizing who came out on top as he converted three crucial birdies on the closing holes and signed for a four under par 68, which gave him a two-stroke victory.

The win was an emotional one for the 28-year-old, who admitted it was a tough off-season after he narrowly missed out on a European Tour card at last year’s Challenge Tour Grand Final.

“I’m buzzing. It’s a big moment for me. I’ve had a rough time at home recently so this is a really sweet way to prove to myself that I’ve got it. The belief in myself and the people around me, my team and my family, I’m really grateful for their support. I’m honoured. I think it’s an historic event.

The Dutchman who won twice in his first season on the Challenge Tour in 2013, said: “To be the inaugural winner — it’s a special moment. I think it’s a great initiative.

“It was great fun playing in a final group with a Challenge Tour player, a senior tour player and a lady player. It was a great battle.

“It’s a different vibe and very special to be the first winner and I hope it’s something that can be continued in the future.

“I went into the day with a pretty open mind and I knew it was going to take a low round, someone was going to shoot low today. I had a pretty rough start and lipped out a couple of putts for birdie and holed a couple of good ones for par on two and three.

“It wasn’t easy and I didn’t play great. I had a few loose ones to the right yesterday and today again, but I battled really well.

“Mentally I was in really good shape and that’s what got me through. I stuck to my processes, stayed patient and Meghan was playing really, really well.

“She holed a couple of big putts on the front nine but left the door open for me on 10 and 11 and I answered with two really good birdies on 12 and 13.

“The buzz and tension down the stretch was great. It was a fight and it wasn’t pretty at times, but it was a great experience and really valuable going forwards as well.

“There are a huge amount of positives that I can take from this,” added the player who claimed the presitigious Lytham and St Andrews Links trophies in his last season as an amateur in 2012, a rare feat in itself.

MacLaren finished the Jordan Mixed Open alone in second place — two shots clear of Martin Simonsen, who matched the Ayla Golf Club course record with a final round of 64, which moved him 17 places up the leaderboard and into third place.

Forty players from each of the European Challenge Tour, the Staysure Tour and the Ladies European Tour, plus three amateurs, made up the 123-player field and will forever be remembered as a game-changing tournament.

The final grouping comprised of one player from each of the three Tours, and of the 66 players that made the cut, 20 represented the Ladies European Tour, 21 were from the Staysure Tour and 25 were from the Challenge Tour.

In addition, the back nine battle for the win between MacLaren and Huizing created tense drama all the way to the end.

Players from all three Tours were represented in the top five. The best performer from the over-50s contingent was José Coceres of Argentina who finished in a tie for fourth place alongside Challenge Tour players Jack Senior and Oliver Farr.

Thorough research was performed by tournament officials before the event began.

Data on driving distance, approach shot distance, club selection and scoring was collected after each round, and will provide crucial findings to all three tours.

The low-amateur competitor, Emilie Paltrinieri of Italy, carded rounds of 70, 74, 73 to finish the tournament on one-over.