Aaron Rai dreams of becoming a Hero in India 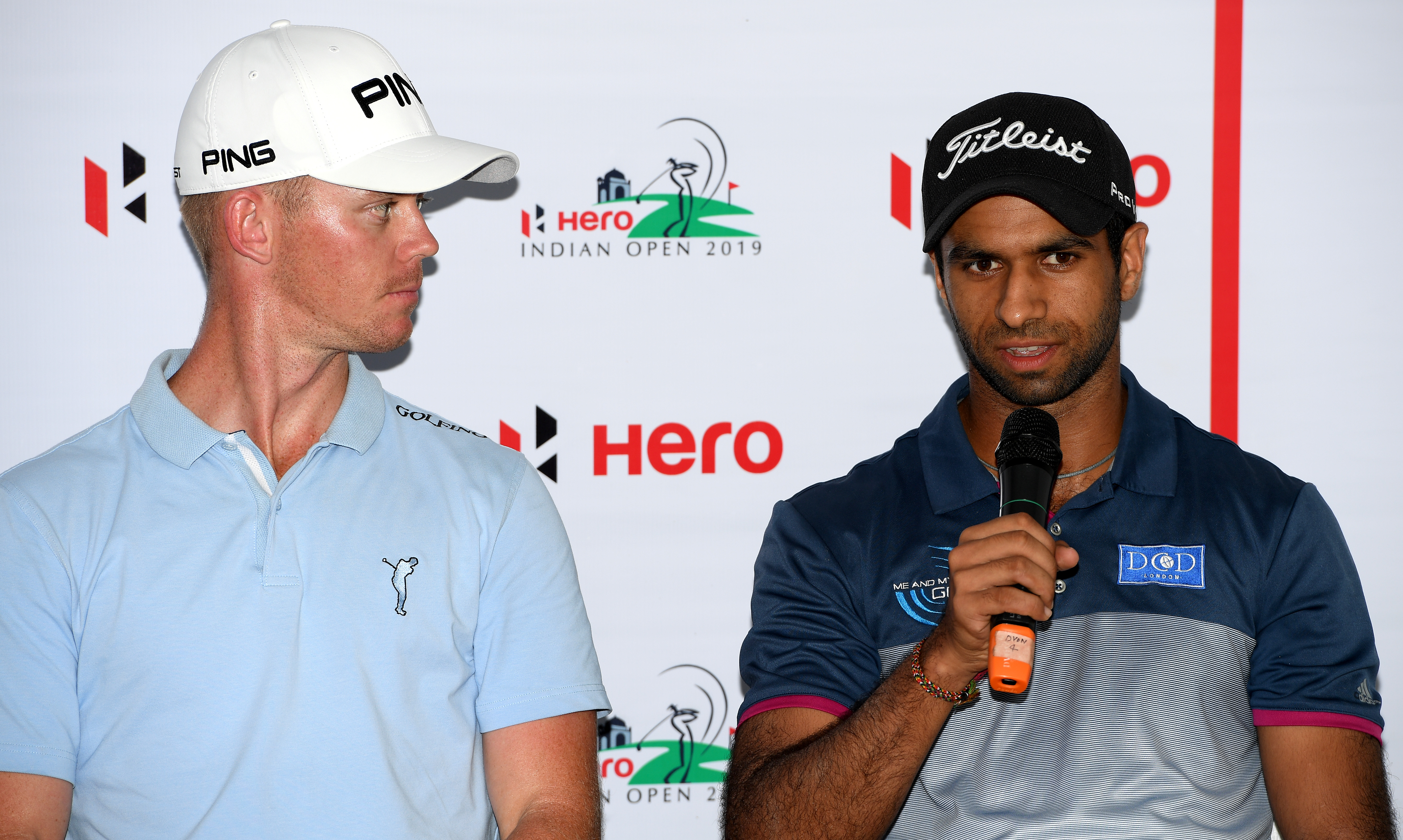 Brandon Stone and Aaron Rai (right) at the DLF Golf and Country Club ahead of this week’s Hero Indian Open. Picture by GETTY IMAGES

AARON Rai insists it would be “a dream come true” to win this week’s Hero Indian Open on a course he holds in extremely high regard.

The 24-year-old Englishman has Indian born grandparents and would love to add a second European Tour title to his CV at DLF Golf and Country Club, on Sunday.

Rai says this week’s host track, The Gary Player Course, is among his favourite in the world and he is happy to be there this week along with a host of local talent.

The golfer, who hails from the West Midlands and first came to prominence at the HSBC Wee Wonders competition, said: “It is in incredible shape and is probably my favourite course in the world.

“It is very scenic to walk around, but more importantly it is a great course, a great test, so you have to be on.

“My grandparents from both my mum and dad’s side where born in India, so back home as well I have family with Indian heritage, so to even compete in India is a blessing.

“So if it was to happen and go one step further that would be a privilege, especially around a course like this where you need to be on your mental and physical game, so a long way to go but if that did happen it would be incredible and a dream come true,” said the Wolverhampton-based golfer.

Four-time European Tour winner Bernd Wiesberger is hoping to see further improvements in his game this week as he continues his return from injury.

The Austrian missed a large chunk of the 2018 Race to Dubai season with a wrist problem but has managed to play nine events so far this campaign and he is pleased with his progress.

Meanwhile, South African Brandon Stone is excited to be in India for the first time this week and the 2018 Aberdeen Standard Investments Scottish Open winner hopes to be in the shake-up in Sunday’s final round.

Wiesberger said: “I haven’t been to India for five or six years so it’s nice to be back and I am looking forward to coming to a golf course that has been described as somewhat challenging, and something different to what we see on a regular basis.

“I have been out there for nine holes this afternoon and it’s quite spectacular.

“I was here the last time when it was the old design, so incredible what has been achieved here – an amazing course in great condition –so looking forward to a strong test of golf here in India.

“Unfortunately, I was out from May until November and that was quite a tough break for me not having any golf to play over summer with the injury in my left wrist.

“I still feel the effects of it a little bit, but I’m not where I want to be, so my results have not been anywhere to what

“I expect of myself but at the same time I am kind of taking it easy, week by week, and taking the positives out of every round.

“I am quite happy with the progress in most parts of the game as I have had to restart in a lot of parts of the game, but I am really looking forward to hopefully improving even more in Delhi.”

South African Brandon Stone said: “It’s my first time coming to India and so far, spectacular. I took my first tuk tuk ride yesterday which was a lot of fun, and my first time looking at the course today. Mr Player has come up again with another very unique design.

“My first look at the 17th hole and I wasn’t disappointed, alternative design so let’s say that, the course is in spectacular condition, so I think it’s going to be a very fun week.

“There is a strong field here this week, a lot of local talent, and I am sure they are going to be vying to get their name on the Hero India Open trophy.

“I remember watching the event last year and watching the shot that Matt Wallace hit on 18 to win and didn’t really think it was that good until I walked down the 18th fairway today and realised that was actually top class.

“I’m excited to be here for the event and hoping to put up a stern fight for the championship come Sunday.

Stone also has one eye on the biggest show in town – the IPL cricket.

He said: “On Saturday I will most certainly be there. It has been on my bucket list the last few years, ever since the IPL came to South Africa.

“So to actually go to a game in India where I have a couple of mates that play for the Delhi Capitals – I am quite envious I won’t be at the game tonight.

“But at the same time we are going to be making a lot of friendships with the team at Hero tonight in getting this event underway.”