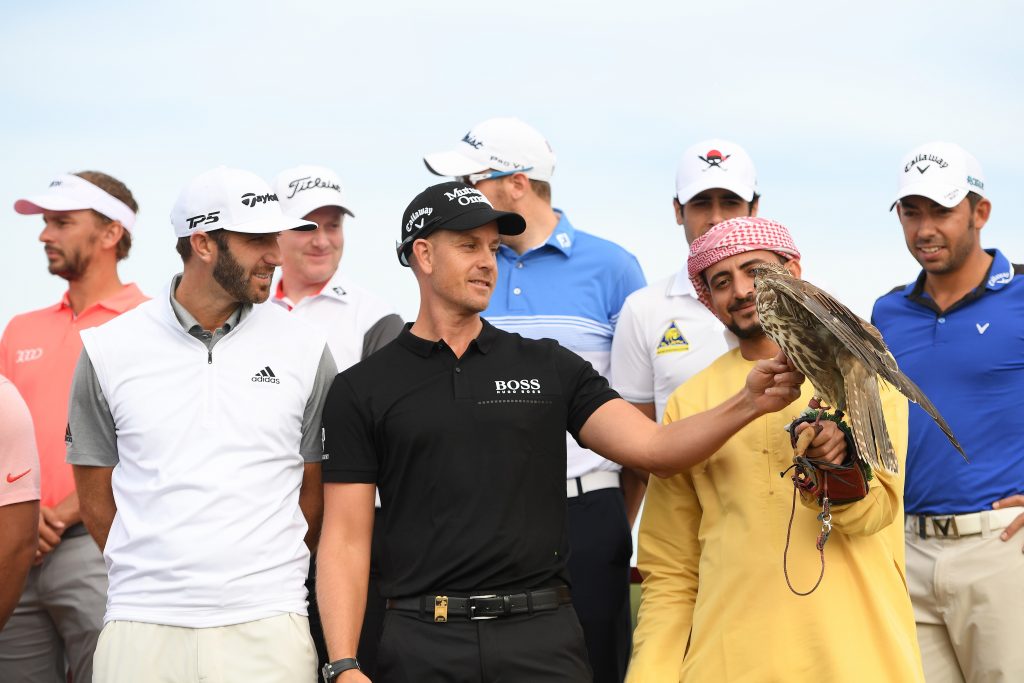 Henrik Stenson gets up close to one of the falcons famed for in the Emirate state watched by Dustin Johnston (left) and other members of the European Tour ahead of this week’s Abu Dhabi HSBC Championship. Picture by GETTY IMAGES.

RYDER Cup hero Henrik Stenson is feeling quietly confident about his return to action this week as the Swede makes his first appearance of the new European Tour season at the Abu Dhabi HSBC Championship.

The event, presented by EGA, kicks off the new year as the maiden Rolex Series event of the Race to Dubai for the first time in 2019.

The 2016 Open Champion has made just three starts since playing his part in a European victory at The Ryder Cup at Le Paris National, in September, having undergone surgery on his elbow in October.

Stenson is feeling close to full fitness and – having claimed a couple of runner-up finishes and four further top tens in his 13 appearances in Abu Dhabi – the 42-year-old is confident of a strong performance in his first outing of the year.

Stenson said: “The elbow’s pretty good. I wouldn’t say it’s 100 per cent but we’re getting closer and closer and I can be back at most of the things in the gym. Playing golf feels pretty good, so I’m happy with the progress on that.

“I played three events at the end of November and December last year. There has not been a lot of golf the previous two months. I think it was just The Ryder Cup and then finished off with three tournaments before Christmas and half a shorter break and now we’re back at it again.

“It always feels good to come back to this part of the world, having made it my home for quite a few years in the past and yeah, this is the way I’ve started up my season every year I think for, which edition is this, the 14th.

“It’s kind of the same old, but it’s great to be back. The golf courses are good, it’s a great course this week. There’s great weather, great practise facilities, I’ve got part of my team here, good food, good hotels. It’s a good way to kick off the season for sure.”

Meanwhile Brooks Koepks – winner of the last two Majors of 2018 after following up with his successful US Open defence at Shinnecock with victor  returns to the event for the first time since 2014.

And the World No. 2 has been enjoying reacquainting with old friends from his time on European Tour and Challenge Tour.

The American will be hoping to add a first Rolex Series title to the three Majors he has picked up in the last two seasons and in the process return to the top of the Official World Golf Ranking.

“It’s obviously nice to be back,” Koepka confirmed.

“I enjoy playing this golf course, it’s a fun place to be, a fun place to come back to and it feels like I’m re-living those memories when I was on the European Tour and Challenge Tour.

“It’s always nice to bring those memories back. There are a lot of guys you don’t get to see very often, and I made some great friendships over here when I was playing, and not getting to see them all the time isn’t always fun.

“But when you come back and see everybody, it makes it feel a little bit more special.

“I am thinking about the world rankings. It’s always nice to be the best in the world at something.

“You try to play your best and be on top, but there’s no extra added pressure or anything like that.

“If I do what I’m supposed to do, I’ll be just fine and get back up on the top.”