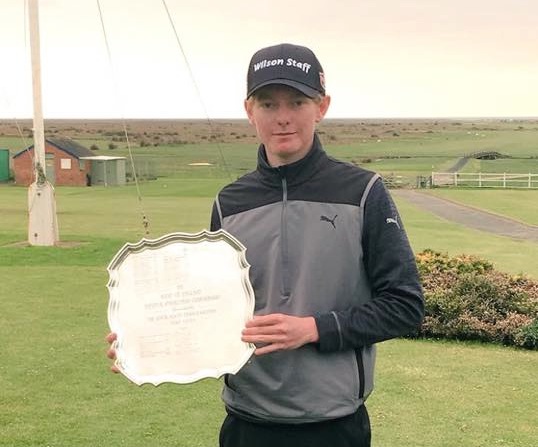 GEORGE Saunders became just the second Hampshire player to ever win the West of England Strokeplay Championship title – although he had to share the spoils with Northants’ Callum Farr who followed up his victory in the Selborne Salver last month with another impressive display.

Both players carded totals of four-under par, but it was Saunders, who had to make all the running on the 18th to make a birdie three that he knew would tie his total with Farr’s after three windy days on the North Devon coast.

Since the competition was founded back in 1968 at England’s oldest golf club at Westward Ho!, only Rowlands Castle’s Darren Wright has taken the honours home to Hampshire – back in 2009 – although past winner’s on the salver include the likes of European Tour players Chris Wood, David Horsey, Richard Finch and Peter Baker – as well as top amateurs including Peter McEvoy and Gary Wolstenholme.

Saunders, from the same Meon Valley Golf and Country Club as reigning British Amateur Champion Harry Ellis, had been on course for his second round of 71 on Sunday with three holes to play, having shared the 54-hole lead with Dorset’s England junior international Thomas Plumb.

After a chip-in on the 10th you sensed another Hampshire triumph was on the cards, especially when Saunders made a great up and down from a greenside bunker on the 14th to make par.

But a tired swing on the par three 16th saw the former England U16 international card a bogey four and he was unable to cash in on the par five 17th.
So after despatching a good drive on the 414-yard home hole, the Hampshire lad was left with a nine-iron from 144 yards – and there was no mistaking his intentions as he rolled in the 16-footer for the three that tied clubhouse leader Farr, who has shot a fine 70 to move two places up the leaderboard in the final round.

It was the culmination of a month of good form and vindication of a winter of hard work after missing out on a place in the Hampshire team that went on to be crowned English County Champions for the first time in 21 years in North Cornwall, at Trevose GC, in October, such is the strength in depth in Hampshire even though they were without Ellis, and Scott Gregory who had just turned pro.

But six months on, victory a few miles along the coast in Devon – even a shared one – looked remote despite having come through the worst of the weather on Friday, when Saunders had to contend with wind and rain to card a one-over par 73.

As the weather improved on Saturday, he produced a four-shot improvement to jump up from 11th place into a share of second spot courtesy of a sparkling 69 which included four birdies and an eagle at the ninth as he bounced back from dropped shots at the second and third, having also made three at the sixth, ranked the hardest hole on the course.

But that fine recovery looked to have been wasted as Saunders shot three-over for his first 10 holes in the third round on Sunday morning after a six on the first hole of his back nine.

George said: “I was one-over for the tournament so I set myself a goal to finish level to at least give myself a chance in the final round.”
That recalibration of his expectations did the trick as he fired four birdies in the space six holes.

He hit his 90-yard approach to three feet on the 11th and get up and down to make a six-footer for his four on the par five 13th, before holing from 14 feet on the 14th to get back to level for the round.

He then found the bottom of the cup from 15 feet at the 16th to ensure he would go out with a share of the lead with Plumb, who had fired a best of the week 64 on Saturday.