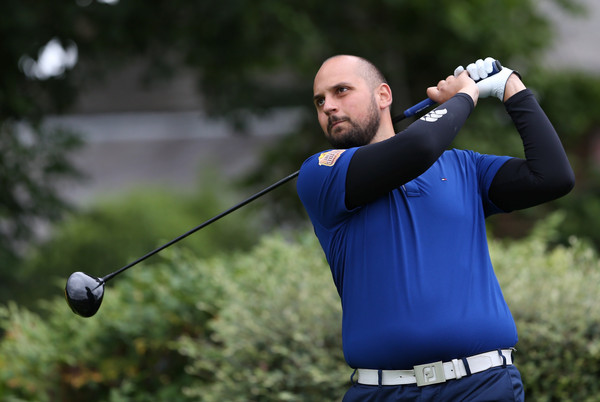 Giuseppe Licata made it back-to-back wins when he snatched the Oake Manor pro-am prize by one shot after reverting to his old putter.

The Chipping Sodbury teaching professional said: ”I have been playing well recently but not holing any putts so three weeks ago  I looked in the garage for the putter I used  ten years ago and it seems to be working.”

He usually comes into his own during the winter with the Gloucester and Somerset PGA but his form has come a little earlier this year.

“I don’t seem to do much in the summer but from September to March it all seems to come together,” he said.

Accuracy off the tee helped him pick up three shots on the way out and he added a fourth birdie at the 15th after dropping his only shot on the short tenth.

Although it was a day of higher-than-usual scoring, Licata made it a double by helping Tracy Park trio Ian Gay, Darryl Gay and Andrew Kelly set a West record in winning the team award on 25-under-par 115. Kelly made seven pars off a handicap of 18.

After dropping a shot on the opening hole Watson followed with four successive birdies. Gill dropped two shots on the front nine but rallied with three birdies and an eagle at the 17th.

O’Hanlon also took five on the first but an eagle on the 17th gave him a chance to post a winning score with a birdie on the last. But he made bogey.