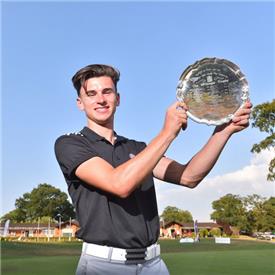 Conor Gough – the first winner of the McGregor Trophy from BB&O.
Picture by Leaderboard Photography

England Boys international Conor Gough, from Stoke Park, claimed his second England crown when he holed out from 25ft on the last to win the McGregor Trophy at Kedleston Park, on Thursday.

The 15-year-old signed off with a 68 and a 72-hole total of seven-under par, snatching a one shot victory in the English U16 boys’ open championship from Yorkshire boy champion Ben Schmidt.

The McGregor Trophy is one of golf’s most sought-after U16 titles and Gough follows in the footsteps of such previous winners as Justin Rose and Eduardo Molinari.

Conor is now eyeing the U18 Carris Trophy, which takes place at Fulford, in Yorkshire, next week.

He said: “I’m really pleased with this and it gives me a chance to win the triple, so it means a lot.”

Gough was three shots off the lead, held by Schmidt, at the start of the final round. But, after 12 holes he’d slipped back further and trailed by five.

“I knew I had to do something special,” he said – and that’s what he did.

He played the remaining six holes in four under par, with birdies on 13; 15, where he chipped in; 17, where he had a tap in; and 18 where he rolled in that winning 25-footer.

Conor added: “I hit good shots and the right shots at the right time and I played really well under the pressure.”

This is his second win of the year, after claiming the boys’ title at the Fairhaven Trophies.

He will also compete in the European Young Masters, which takes place later this month.

Hanbury Manor’s Dominic Clemons was in ninth place on one-over par, with Surrey’s Harry Crockett a shot back in a share of 10th with Worthing’s Billy Groom.

Bishops Stortford’s Max Hopkins who won the individual prize at the South East Boys Qualifier at Blackmoor earlier this month was in a share of 14th with Gough’s Stoke Park clubmate Taylor Paul, on three-over.

Taylor shot 71 in the last round to move up five places.