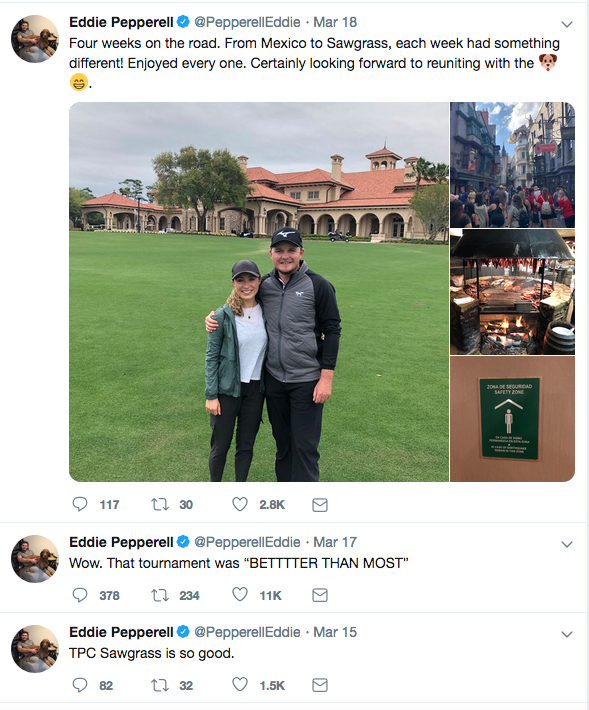 Frilford Heath’s Eddie Pepperell tweeted after his sensational third place at The Players Championship, at Sawgrass.

FRILFORD Heath’s Eddie Pepperell produced the performance of his life to shoot up the Players leaderboard even though he was eventually eclipsed by Rory McIlroy’s triumph at Sawgrass, finishing tied for third on Sunday.

While Irish eyes were smiling as McIlroy sparked a huge St Patrick’s Day celebration with his first win in golf’s unofficial fifth Major, it was the Oxfordshire ace’s remarkable rise up the leaderboard that delighted everyone who watched Eddie’s rise through the ranks as an amateur playing for B.B.&O. and England after a superb 66.

And that was topped by an incredible 30-foot putt at Sawgrass’ signature short hole for a two at the 17th – his third birdie in a row and his fifth in seven holes from the 11th.

His snaking shot came off a hump by the fringe before curling down the slope and into the bottom of the cup to send the huge crowd around the amphitheatre wild – even though he admitted he was walking after it as he expected to be left with just a tap in.

Eddie said: “I just figured it was going to be a tap-in. I was kind of relieved I didn’t have to face a three-footer in front of all those people, and then obviously when it went in.

“What can I say, it was pretty awesome, to be fair.”

The 28-year-old was in great company playing alongside Hampshire’s Justin Rose, who was hoping to gatecrash Rory’s party with a top five finish that would strengthen his hopes of regaining the World No. 1 crown from Dustin Johnson.

Pepperell admitted at the start of his round, lying in 16th place, he was not even contemplating beating his more illustrious playing partner.

Eddie added: “It was obviously fun. Playing with Justin was good. I mean, for the front nine, I just thought there’s no way I’m beating Justin today.

“He was pretty flawless and then it looked like he was going to kind of cruise around, and I kind of managed to make a couple of good birdies at the end of the front nine to give me something to go off.

“But it was a lot of fun. Obviously coming in on the 17th was special.”

That birdie got him to 14-under par and with Rory having made a bogey on the 14th, Eddie was left with a difficult up and down on 18 to be the tournament leader in the clubhouse, and with a real chance of a play-off.

Eddie, who has two wins to his name on the European Tour after his victory in the British Masters at Walton Heath in October, added: “I knew that Jhonattan (Vegas) had hit the fairway, so I thought, he’s unlikely going to make a five from there.

“So I need to get this up-and-down on the last. And actually the chip was tougher than I thought it was going to be,” said Pepperell, whose drive down the last found the rough on the right.

He added: “So when I decided to hit the three-iron second shot to get up close to the green, I didn’t think it was going to be quite as fast, and then I saw it and obviously it was.

“I had to play it slightly different than how I had imagined it, but it was a nice putt to hole for sure.”

Pepperell, whose breakthrough win came in Qatar just over a year ago, was very pleased with his play over the back nine, which has seen tons of drama down the years – regardless of whether the Players has been played in March or May.

Eddie, who started Sunday down in 16th place, said: “The bunker shot I hit on 14 and the pitch I holed on 15 were – no matter who hits them at any stage of a golf tournament – they’re great short game shots.

“They just gave me kind of a sense of huge confidence. I kind of felt invincible, really… around the greens.”

Having dropped a shot at the par five second, birdies at the seventh and ninth got him to the turn in one-under and nine-under for the tournament.

The former Drayton Golf Club junior got up and down well on the 11th for a birdie, thanks to a perfect pitch.

He then made a birdie two at the 13th before his crucial save from the bunker on the 14th.

Back-to-back birdies on the 15th and the par five 16th got him within a sniff of Rory, and Eddie sent the temperature soaring with that putt on 17.

But he admitted after feeling frustrated with his game in practice on Tuesday, the week at Ponte Vedra Beach – the home of the US professional tour in north east Florida – had been another steep learning curve.

Eddie said: “It’s eerily similar to what happened last year on a number of occasions. It’s unfortunate that I’ve got to go through those moments of frustration, but out the other side does come, you know, seemingly good stuff.

“I maybe wouldn’t have done that in the past. I wouldn’t have even bothered. I went home, went to sleep, came back, restarted and had a really productive Tuesday evening. Maybe that was the difference.

“But it’s not like I flushed the golf ball this week. If I hit it like that for the rest of the year, then you’ll see me with plenty of snapped clubs.

“It’s a great first experience at this place because I obviously hope I’ll be back here, and to have some really nice memories of what’s happened today – obviously coming back will be nice.”