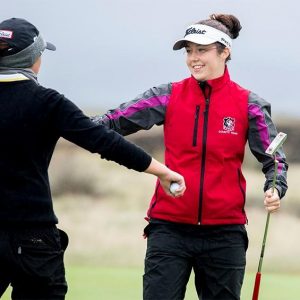 The excitement is ramping up at Royal North Devon with one round left to play – and all three teams in the title hunt.

They all won their third match of the week on Thursday, and they’re neck and neck at the top of the table.

Gloucestershire have a narrow advantage thanks to their superior total of game points.

They have 16.5 points while South East Champions Surrey have 15 and Buckinghamshire have 14.

Such small margins could be crucial at Westward Ho! tomorrow (Friday) when the order of play will see Surrey take on Staffordshire, Buckinghamshire meet Gloucestershire and Yorkshire play Norfolk.

Surrey’s Katie Laud probably summed up for all the teams when she said: “We need to win as many points as we can tomorrow – and hope.

“We know we are behind and there are three teams than can win so we’ll be going for 5-0.”

The fouth day’s s action was played out in more dreary weather, but it was rain which challenged the players, rather than the winds of the last couple of days.

And the players much preferred it, particularly when putting.

“The rain was horrible but it’s the wind which is punishing,” said Buckinghamshire captain Sue Ashworth, whose team bounced back from an opening day defeat against Surrey by beating Norfolk 31/2-11/2 on Tuesday

You can protect against the rain,” added Sue, whose team won the Midlands South Crown as hosts at Denham, in June, and are still looking for thier first English County Championship title in 66 years.

Her team went all out to beat Staffordshire 4-1 – only too aware that both teams were tied at the start of the day and a win was essential to keep their title hopes alive having also beaten Yorkshire 4-2 on day three.

Alice Kozlowski and Georgina Bowers led the way in the foursomes, taking charge in the middle of the round, and were followed by singles successes from Daisy Kennedy (1up), Thalia Kirby (6&5) and Rachel Goodwin (3&2).

Ashwoth added: “The brief was to win and they were amazing, brilliant.

“The weather was foul to start with but the girls did good and everyone else was out supporting, including the girls who didn’t play. It was great team spirit.

“We knew we had to win today to have a chance tomorrow. If we had lost it would have been all over, but we have given ourselves a chance.”

Gloucestershire held on to their narrow lead in the championship with their 3-2 win over Norfolk.

But it was tight – and it fell to Ffion Tynan to keep their title hopes alive by halving the last to win her game 1 up.

Gloucestershire’s bid to regain the title they won in 2016 had been stalled by Wednesday’s defeat, but there was no doubting their intentions today.

Captain Anda Knight said: “Yesterday was disappointing, but we were frustrated by the wind and the other team adapted better than we did, so all credit to them.

“Today their attitude has been fantastic.”

Surrey were another team in determined mood, having beaten Nofolk 31/2-21/2 on Wednesday after their 4-1 defeat against Gloucestershire 24 hours earlier.

“We had our game face on!” said team captain Sally Parrish, after their 4-1 win over Yorkshire. “It keeps us very much in contention.”

Their fouth match in four days did have to contend with strengthening winds over the closing holes.

But Surrey kept focussed and mounted up the points in search of their 11th English County Championship victory – Yorkshire the 2017 winners have a record 13 wins.

Sarah Wilmore and Rafiah Banday teamed up to take the foursomes 2&1, while there was a particularly convincing 5&4 win for Canice Screene.

Nicola Taylor’s one-up win pushed the team over the winning line and Laud’s two-up win at the end of the order added another precious point to the tally.

Thusday’ matches were again reduced to one foursomes and four singles because of the adverse weather conditions.