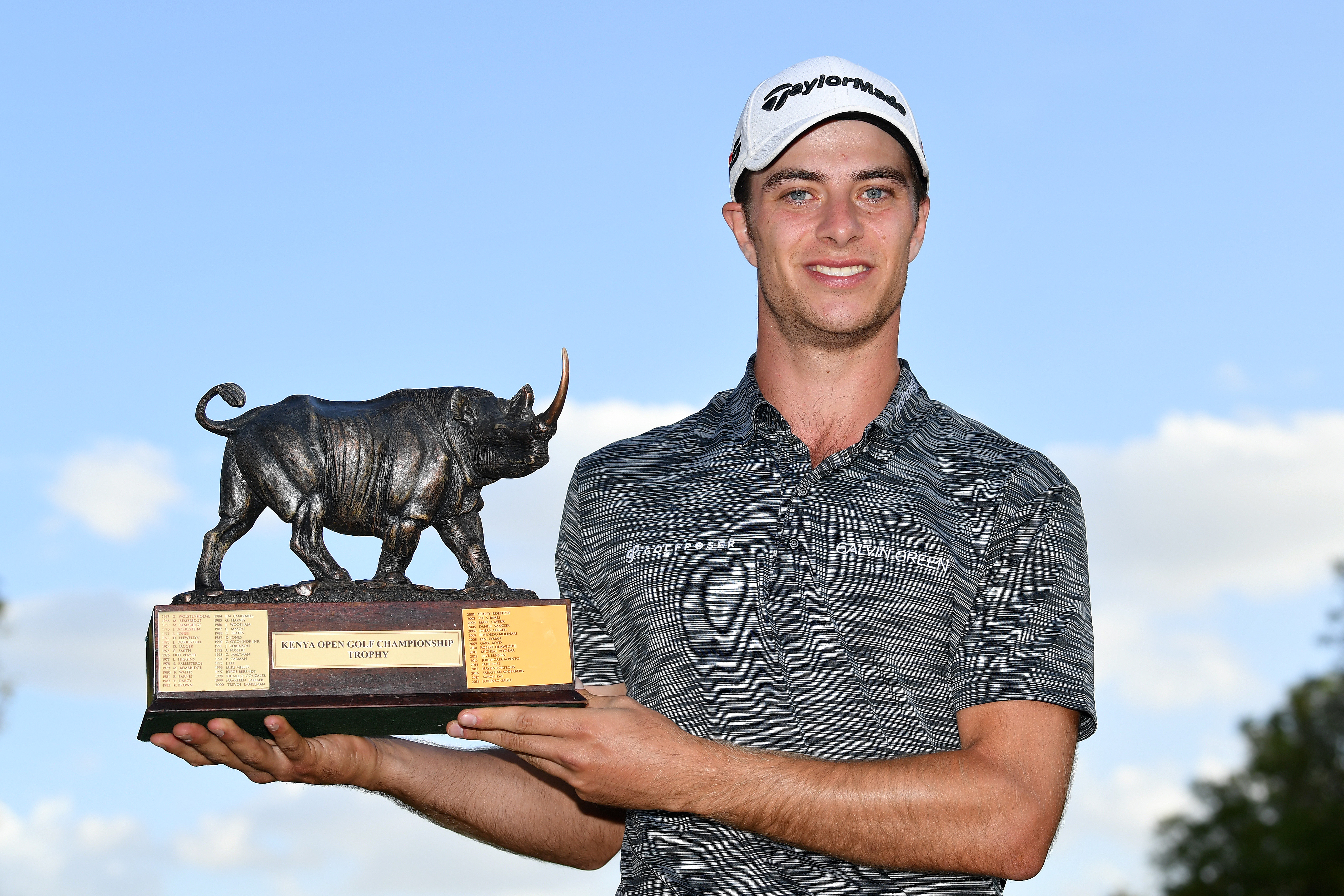 Guido Migliozzi who was crowned the first winner of the Magical Kenya Open at Karen Country Club. Picture by GETTY IMAGES

GUIDO Migliozzi held his nerve to claim a maiden European Tour title after carding a closing round of 69 to win the Magical Kenya Open.

The Italian, who became a European Tour member for the first time in November after progressing through Qualifying School, started the day in a tie for the lead with fellow rookie Adri Arnaus.

And the pair exchanged blows throughout an enthralling final day in Nairobi until Migliozzi closed out in style hitting the pin with his approach shot on the 18th in front a large crowd at Kenya’s inaugural European Tour event.

Migliozzi, who claimed three victories in 2017 and 2018 playing on the Alps Tour – where Hertfordshire’s Matt Wallace proved his winning pedigree with six wins in 2016 – was beaming after his win.

The former Italian Amateur Strokeplay and Matchplay champion, who was the first player to sign for One Direction’s Nial Horan’s Modest Golf management group, said: “I like the pressure, it’s like a drug. I love pressure, I love playing with a lot of people looking at me and a lot of cameras.

“Obviously I played with Adri Arnaus and we had a beautiful match together yesterday, it was like match play and today was a great battle.

“Yesterday I went to the left at the 18th with a two iron, today a four iron to be sure to not go left, and I had the perfect distance for an eight iron, it was really nice. Easy two putts to win.

“I enjoyed the last two days very much. The pressure was a lot and I’m happy about how I’m playing under pressure, also with my putting game that I worked a lot on.

“I would like to thank every part of my team,” added the 2016 Portuguese International Amateur Champion.

It was the 22-year-old who would prevail though delivering when it mattered most by hitting the pin with his approach to the 18th to set up a two-putt par which saw him triumph by one shot.

Finishing one behind Migliozzi was Arnaus and South Africans Louis de Jager and Justin Harding.

Following his Qatar Masters victory last week, Harding was firmly in contention right down to the wire in the Kenyan capital, thanks to a five-under final round of 66.

Harding, who needs to break into the World top 50 to earn a debut in the Masters at Augusta, next month, said: “I think I’m probably still going to have to have a decent result come the Match Play but I’ve at least given myself a decent shot at Augusta.

“I thought I played quite nicely. Didn’t get everything out of the front nine, couple of bad chips on six and seven which were naughty, but gave myself a chance coming down the stretch.

“It was another good week, pretty pleased. I battled, probably from hole one, with club selection and the wind swirling around so to have come out and posted 15-under, I’m pleased.

“I had a good week last week and another one this week so I’m sitting quite nicely first season on the European Tour.”

Having gone back-to-back with wins on the Sunshine Tour and Asian Tour last year, many were thinking he could complete a remarkable treble after making an eagle on the 12th, but ultimately the bogey on 13 ended his dream of another win so soon.

Setting a new course record at Karen Country Club was Scotland’s Robert MacIntyre, who ended a nine-week stretch away from his native Scotland with a scintillating eight under par round of 63.

MacIntyre, who lost in the 2016 Amateur Championship final to Hampshire’s Scott Gregory, said: “I’m absolutely delighted. I didn’t really expect that after the way I’ve been playing but I just went out with complete freedom and managed to get it round in eight under.

“I just can’t wait to get home and see the family, the two foster kids Dan and Tom, it’s just so relaxing back in Oban, everything about it.

“It just wasn’t feeling natural and today I went out there and made myself feel free and it just worked.

“I’ve got the game to go and shoot these numbers as I showed, it’s just playing with freedom and that’s what I did. That’s the way I’ve got to try and get my mindset for the rest of the year.” 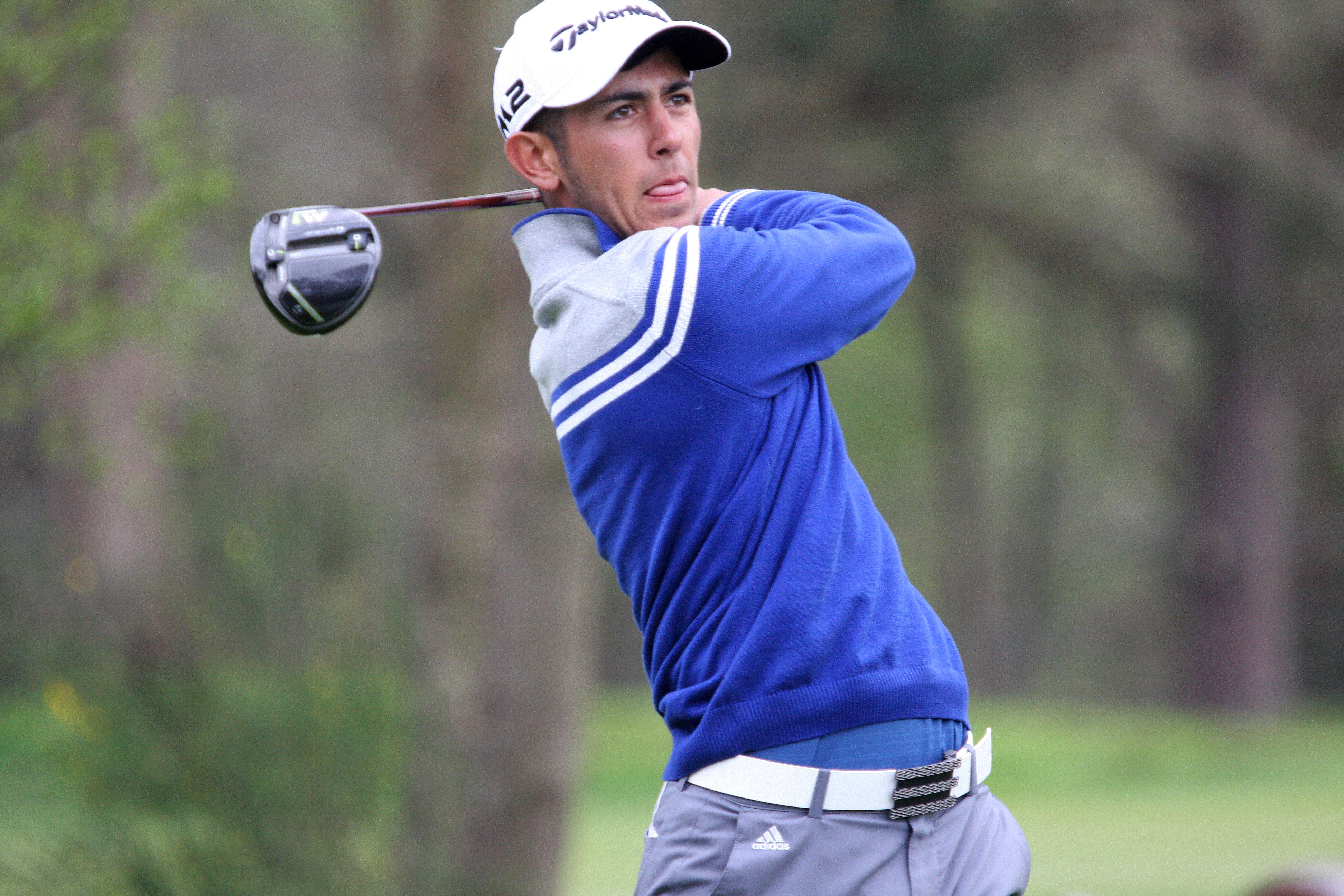 Hampshire rookie Jack Singh-Brar, who finished 12th to move up to 86th place on the Race to Dubai. Picture by ANDREW GRIFFIN / AMG PICTURES

Hampshire rookie Jack Singh Brar, who started Sunday with a chance of his maiden European win, but a two-over 73 saw him drop from sixth to 12th leaving the winner of last year’s Cordon Golf Open on the Challenge Tour with a cheque for €17,208, pushing him up to 86th place on the Race to Dubai.

He was one of 15 players to earn a full tour card on the Challenge Tour in 2018.