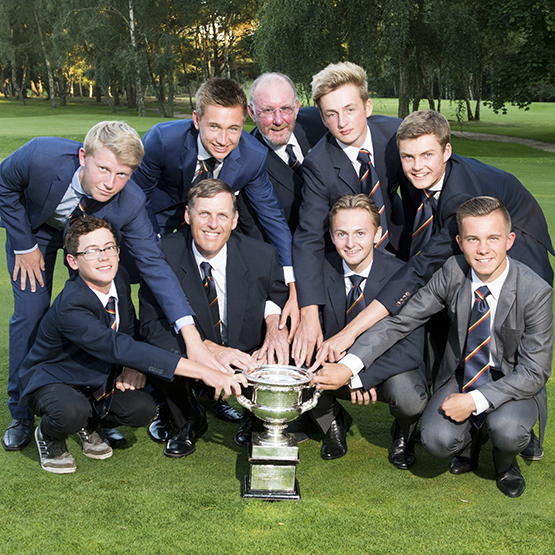 Wiltshire played their hearts out today to win the English Boys’ County Championship for the first time in a thrilling finale at King’s Lynn Golf Club.

They were pushed all the way by Northamptonshire, who were playing in County Finals for the first time, but Wiltshire found the answers when it counted and eventually won 6-3.

“I am so proud of them, I can’t praise the lads enough, they have been absolutely outstanding. I can’t single out one person, it’s a team effort and everyone played their part,” said manager Ian Welding. “This is absolutely fantastic and massive for the county.”

The match was intensely close all day. Only one foursomes was won outright – by Wiltshire – and the other two were halved. As the singles unfolded there was nothing to separate the teams as scores mostly swung between all square and one up, first favouring one county then the other.

Suddenly though, Wiltshire got within touching distance of the trophy. The team’s top player, James Cooper, worked his way to a 2/1 win over Matthew Myers, while Jamie Amor, playing at the bottom of the order, streaked away from his opponent and secured an impressive 5/4 win.

Jake Bolton won the 15th to go dormie three up – and Wiltshire needed just a halved hole to secure the title. But Northamptonshire’s Callum Farr had other ideas: he birdied the 16th, parred the 17th – despite sending his drive on to an adjacent fairway – and parred 18th to pull the match back to all square.

Wiltshire had 4½ points in the bag and had to secure another half point to win the title. It was provided in grandstand style by Dom Burgess who won the 18th to square his match and win the championship. He played a superb chip from above the green which finished within inches of the cup and gave him a par, while his opponent, playing from a similar position, failed to get up and down.

Afterwards Welding revealed that Burgess had suggested he be dropped for the final session because he didn’t think he was playing well enough. “He was wavering, but I had no doubts at all because I know what he can do under pressure – and I was so pleased for him,” said the manager.

Another fighting performance sealed the result for Wiltshire when Tom Stagg won his match on the 18th with a solid par.

“This is an absolute thrill for Wiltshire, especially as we are doing a lot of good things for the juniors and putting new programmes in place,” added Wilding.

In the day’s other match Hampshire scored their first win of the week, beating Durham 6-3, and securing third place in the championship.