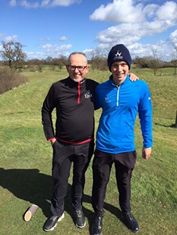 . (Will pictured with Danny Poulter)

The PGA Euro Pro Tour Qualifying School tournament was open to all professional golfers as well as amateurs with an official handicap of two or less.  With the assistance of Caimin Condren and the Lee Westwood Golf team Will invested a lot of time in perfecting his swing for the first stage of the tournament which took place at Chart Hills Golf Club on Wednesday 30th & Thursday 31st March 2016.  Simon Dainty, a Lee Westwood Golf School coach also caddied for Will during the event.

Simon said “Will has come a long way during his pathway through the school, he is extremely committed to the game and I am impressed both by his golfing ability and his sportsmanship”.  Having attended the Lee Westwood Golf Camps during the school holidays Will joined the school in 2013 on a 2-year golf and education programme and enhanced this with a Gap year to further develop his golf.  During his time at the school Will has seen his handicap drop from 5 to ‘scratch’.

Rounds of 78 (+6) and 74 (+2) meant Will finished in a tie for 37th and missed out on advancing to the second stage by four strokes. None the less Will took great pride in competing in his first professional event and is now looking forward to the rest of the season.

We wish you the best of luck Will!

Please read on for an account of Will’s pathway through the school:

I have been playing golf since I was 4 years old and before joining the school captained my counties under 14, 16 and 18 squad and won the Norfolk County Golf Union under 16 title two years in a row.

I joined the school in September 2013 with a handicap of 5.  The highlights of the year included a trip to the Dunhill Links championship for work experience and winter training at the amazing Desert Springs Golf resort in Spain.  During these first few months I managed to reduce my handicap to 2 and improved my short and long game.  With the help of the LWGS coaches and by using video analysis and trackman, by May I was off of 1.

Through the year I also worked hard on my education and finished the year with a distinction grade in each unit. Achieving the Year 1 order of merit and winning an ISM experience to Dunhill and a pair of DNA golf shoes was also a highpoint

In my second year at the school we went to the Royal Andalucia Golf Resort in Spain for winter training and then I was luckily enough to be picked as school captain to play in the British Schools and Colleges finals.  I managed to come third shooting rounds of level par and +3.

In July 2015, thanks to the school, I graduated with a handicap of scratch and an education grade of D*D*D*.  I had also managed to improve my ﬁtness and nutrition through the help of the ﬁtness coaches.   Other qualifications gained during the two years included a Tri Golf Teaching qualification, PGA Level 1 coaching badge and the PING I Learn Club Fitting qualification.

To enable me to reach my goal of being a touring professional I decided to do a Gap year at the school, attending 3 days a week to concentrate on my golf and complete a Business BTEC course.  I now look forward to competing in the PGA Euro Pro Tour Qualifying Schools with the first stage of the tournament in March, and I even have Lee Westwood Golf School coach, Simon Dainty, caddying for me!!

None of this would have been possible without the help of the education teachers, golf coaches and fitness coach.  The school has given me an amazing amount of help and enabled me to compete in international events.