By on in Competitions, Events, News, Pro News 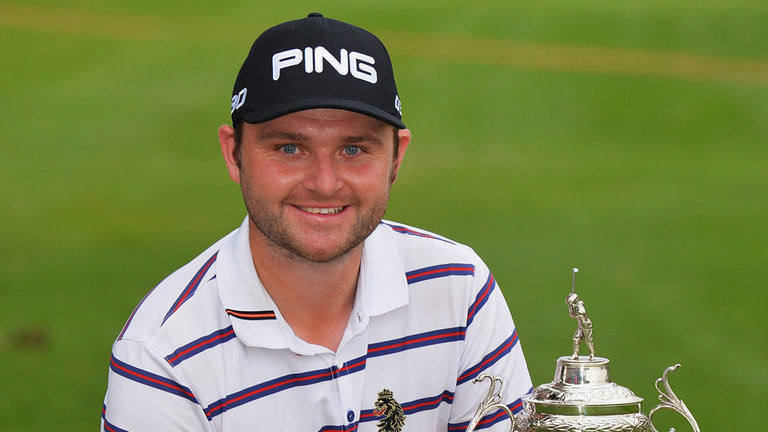 FootJoy, the #1 Shoe and Glove in Golf, is celebrating a phenomenal start to the 2015 season after Andy Sullivan’s victory at the Joburg Open made it nine wins out of ten on the European Tour this season for the brand.

The Englishman, trusting the all-round excellence of FJ ICON MyJoys™, produced a stunning final round 66 to claim his second victory in South Africa in as many months, gaining a spot in the 2015 Open Championship in the process.

Following his earlier victory at the South African Open Championship, Sullivan started the week as the highest-ranked player in the field and lived up to that billing with five birdies in the opening nine holes on Sunday. A solitary bogey at the 11th was offset by yet another shot gained on 15, as Sullivan maintained his position as one of three men in contention with play drawing to a close.

However, as his challengers faltered, the Warwickshire native took full advantage, closing out with a birdie four on the par-5 18th, to seal a well-earned two-stroke victory.

“It’s unbelievable,” said the 28-year-old, as he was presented with the Joburg Open Trophy and a cheque for €206,050. “I never imagined it would happen again so quickly.

“Coming down the stretch, me and my caddie were loving life again and enjoying it. It seems to be a theme, enjoying my golf and getting the right results at the moment.

“I am on the crest of a wave at the moment and I don’t want it to end. I just want to keep it going.”

With this victory, Sullivan continues a tremendous streak for FJ shoe wearers, who have tasted success in nine of the first 10 European Tour events of the 2015 season.

This incredible run of victories points to the unparalleled performance of FJ’s market-leading footwear, glove and Performance Apparel collections, which have seen the brand continue to lead field counts in key categories throughout this year’s schedule.

Indeed, the brand witnessed a highly impressive 77% and 47% of golfers in the Joburg Open wearing its shoes and gloves, compared with 14% and 11%, respectively, for its nearest competitors.

Meanwhile, long-time FJ loyalist Padraig Harrington (FJ golf shoes, FJ Pure Touch™) made a welcome return to the winner’s circle with victory at the Honda Classic. The three-time Major winner sealed victory on the 2nd extra hole of a two-man play-off with fellow FJ player Daniel Berger (DryJoys Tour™), clinching his first win in the US or Europe for seven years.

Of the overwhelming popularity of FJ amongst the world’s best players, FJ Marketing Manager, Russell Lawes, said: “We would like to congratulate Andy Sullivan on his second European Tour victory at the Joburg Open, which is further validation of the trust that golf’s biggest stars place in our products.

“The fact that more than three from every four players competing this week chose to wear FJ footwear, and almost half trusted FJ gloves, proves the unmatched performance offered by FJ, which has seen it achieve #1 status among players of all levels around the world.

“It was also great to see fans’ favourite Padraig Harrington earn a hard-fought victory on the PGA Tour and everyone at FJ looks forward to seeing him back in contention again in the near future.”

Whether it is the superior comfort and performance of its advanced footwear family, the advanced feel and fit of its market-leading golf gloves or the contemporary styling of its Performance Apparel Collection, FootJoy remains the overwhelming favourite among golfers of all abilities around the world.