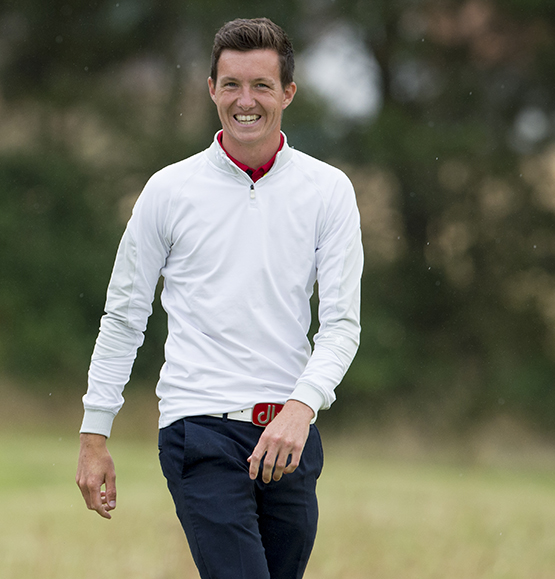 Dorset’s Tom Robson knocked out top seed Will Enefer today to claim his place in the quarter-finals of the men’s English Amateur Championship at Ganton Golf Club.

“It’s been a good day,” said Robson (Weymouth) who earlier defeated Leon Fricker (Yelverton) 3/2. He’s in the quarter finals for the second year in a row and said: “Anything now is a bonus, I just want to enjoy it, that’s what I do it for.”

Robson (image © Leaderboard Photography) had the upper hand throughout his match against Enefer, never dropping behind and eventually winning 2/1. Tomorrow he plays Jack Gaunt (Drayton Park) who was taken to the 21st before clinching his match against Jay Beisser (The Rayleigh).

Yorkshire hopes of a third home winner in a row – after Nick Marsh and Joe Dean – now rest with Dan Brown (Masham). He’s the county’s sole survivor after Steve Robins (Hull) was beaten on the last this afternoon by Jack Singh Brar (Remedy Oak).

Brown had a topsy-turvy day. First he sped through his morning match against Ben Amor (Marlborough) with the help of a hole-in-one on the 158-yard 5th, where he used an eight iron. It was his third hole in one, but his first since he was 11, 10 years ago.

This afternoon he faced Daniel Sutton (Walsall) and had to withstand a determined fightback before making his way into the quarter finals.

Brown was four up after 10 but after 17 holes the pair were level and Brown had to produce a closing birdie to win through. “It was a good birdie under a lot of pressure,” he said. “I’m relieved more than anything.”

The last quarter final will be between George Bloor (Cavendish) and Jack Singh Brar (Remedy Oak). Bloor beat Laird Shepherd (Rye) on the 19th this afternoon while Singh Brar defeated Steve Robins (Hull) by one hole.