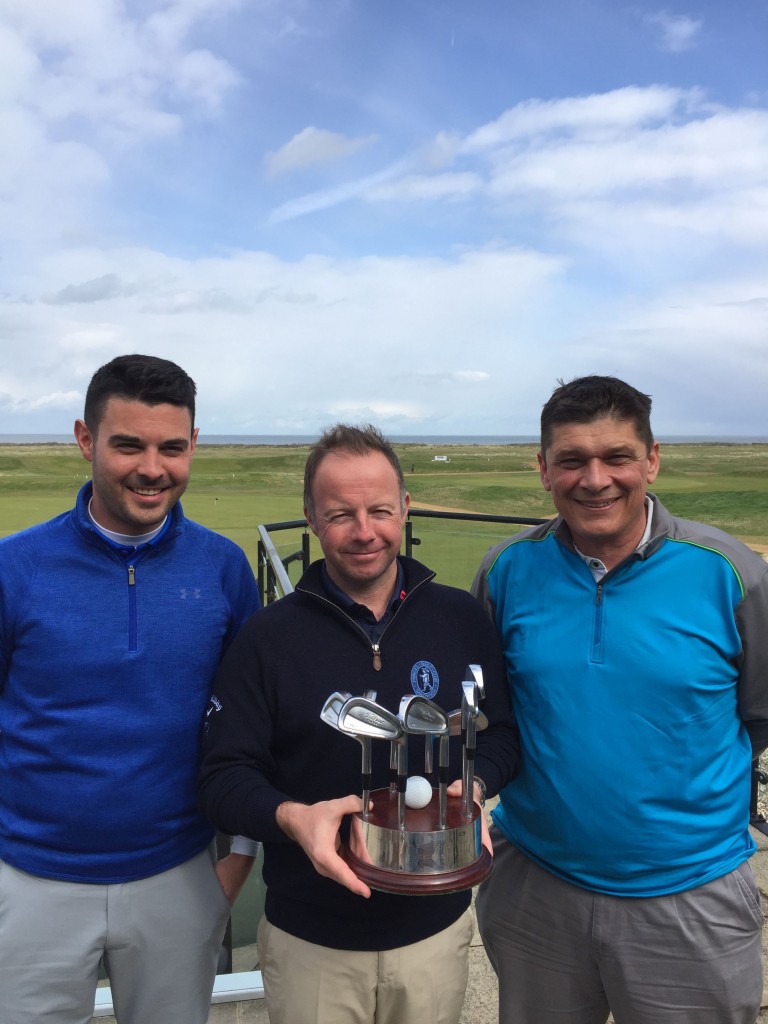 The RIP It For Derek Memorial Pro-Am at Prince’s, won by Dan Smythe, Rob McGuirk and Tim Milford (image with players in that order from left to right).

Kent’s best celebrates the memory of much loved PGA Professional

Prince’s own Rob McGuirk, Tim Milford (PGolfCoaching@Pedham) and Dan Smythe (Horsham Golf & Fitness) all shot cards of two-under-par 70* at Prince’s to share the honours at the RIP It For Derek Memorial Pro-Am, held to celebrate the memory of the late Derek Barbour, Prince’s PGA Head Professional from 1998 to 2006.

The three players went about their two-under-par 70s in very different fashions. Starting at the first, McGuirk was one-over-par at the turn, but turned things right around on the back nine. He got two shots back at the 10th and 11th, and added one more birdie at the 16th to finish with 70.

Milford notched up no less than six birdies on his way round, but offset them with four bogeys. Starting at the fourth, he charged through the 17th, 18th, first and second making four birdies on the trot to power himself back into pole position.

By comparison to the two Kent veterans and starting on the 11th, Sussex newcomer Dan Smythe opened strongly with a birdie on the 12th, but then had a run of six pars. Two more birdies came at the first and the second, but a dropped shot at the ninth, his penultimate hole, was to prove expensive as it left him sharing the winning frame with McGuirk and Milford.

Rob McGuirk, now General Manager of Prince’s and The Lodge at Prince’s, was more than happy with the result, saying, “It’s a great pleasure to host this event, and it’s good to see my extra time in the office is not affecting my game too much! We are striving at Prince’s to produce a top class facility, and with the course in such good shape in April, it will be in fantastic condition for both the CK Group PGA Kent Open Championship** in a few weeks’ time, and later in the year when Prince’s welcomes the R&A for the St Andrews and Jacques Leglise Trophies.”