Notts stay top of the leaderboard 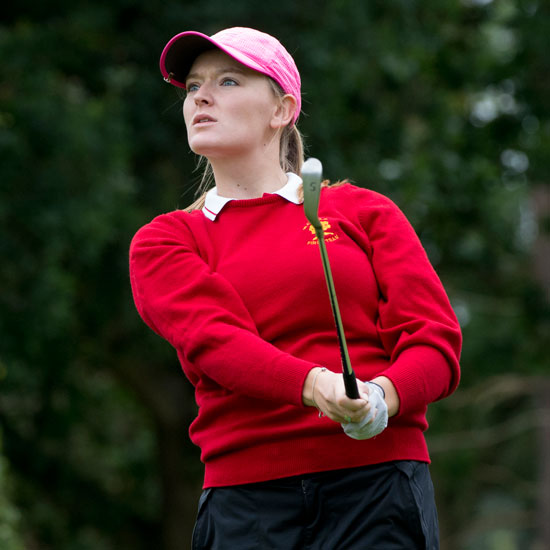 Notts stay top of the leaderboard

Nottinghamshire stayed on top of the leaderboard at Women’s County Finals after a close 3-2 win over Sussex today at Frilford Heath Golf Club.

Tomorrow they will play Gloucestershire in one of the week’s crunch games. Gloucestershire, who beat Buckinghamshire 4-1 today, share second place in the table with Lancashire. The Northern champions also won today, beating Essex 3-2 in another tight match.

Today’s matches were all shortened to one foursome and four singles in a successful move to get the players round before the forecast downpours arrived.

Overall, play was very tight with eight of the 15 games going to the 18th and three others finishing on the 17th.

Nottinghamshire’s Laura Morris (Image © Leaderboard Photography) was among those who went to the last where, for the second day in succession, she provided her team with the crucial winning point.

Her game, against Chloe Court of Sussex, was real nip and tuck and the players were all square from the 15th. Court had an excellent up and down from a greenside bunker to stay on level terms on the 16th, but couldn’t repeat the feat on the 18th where her putt lipped out. Morris sank a three-footer to win the game and the match.

Earlier county champion Rachel Boulton staged an impressive comeback. She was down for most of her match but won four holes in a row from the 13th to get to two up and went on to win by that margin. Lauren Spray provided the final point, winning comfortably on the 15th.

Gloucestershire had the biggest overall win of the day. Their foursomes pair, Ali Kelly and Grace McLaughlin, led the way with a confident performance at the top of the order, while England international Bethan Popel was five-under par for the 13 holes it took to win the bottom match.

Their other two wins were much closer. Becky Gibbs managed to pull ahead when she won the 14th and 15th and, although she lost the 16th, she closed out her opposition on the 17th. Ebonie Lewis was three down at one stage but got on a charge and secured her point on the last.

Lancashire appeared to be heading for a big win over Essex, but four of their games were decided on the 18th and twice they let slip a lead.

The Essex pairing of Amanda Colegate-Herbert and Cassandra Cunningham won the foursomes by one hole, but Lancashire’s international, Hollie Muse, promptly squared matters when she won 2 up – having driven the 291-yard 18th to set up a birdie. Louisa Brunt took Lancashire ahead when she won 4/3 – and the win when in the bag when both Beth Garton and Eloise Healey reached the 18th tee 1 up. However, Essex managed to square both those games to tighten up the final scoreline. “It was tighter than I would have liked but at the end of the day I’m happy!” said Lancashire captain Brenda Flett.