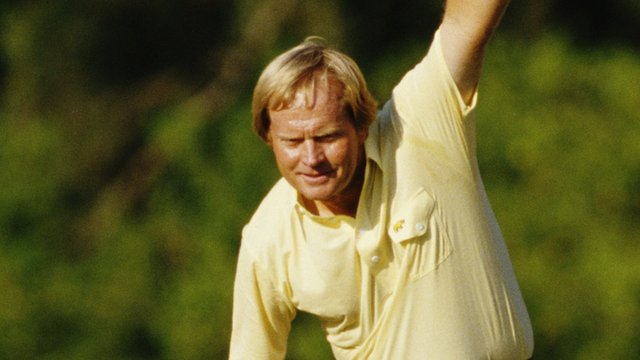 Watching the US Masters as a child was that rare opportunity to stay up late on a Sunday evening that goes back to when Craig Stadler defeated Dan Pohl in a playoff in 1982.

Seve, Ben Crenshaw and Bernhard followed to win and as the 1986 tournament arrived it was one of the most open fields in the events then 52 year history.

The final round came and the Golden Bear was hovering at 2 under par, at that stage in the chasing pack and four behind leader Greg Norman. Ballesteros and Langer were up their again along with the likes of 5 time Open champion Tom Watson and the current Open champion Sandy Lyle.

Over the course of one of the most memorable and exciting final rounds in Masters history, five different players held at least a share of the lead in the final round. Seve Ballesteros gained a share of the lead on the front 9 helped by a hole-out eagle at 8, while Greg Norman and Bernhard Langer struggled early. Jack Nicklaus played his first 8 holes in even par, but stormed into contention with birdies at 9, 10 and 11. However, Nicklaus bogeyed the 12th to fall three behind the leaders. Norman, tied for the lead at –7 as he made the turn, double-bogeyed the 10th hole to give Ballesteros the outright lead by one shot over Tom Kite. Ballesteros hit his 2nd shot at 13 to within 6 feet. After Kite lagged up his own eagle putt, Ballesteros holed his putt for his second eagle of the day and a three shot lead over Kite. Kite then holed his birdie putt to cut the lead back to two.

After a par at 14, Nicklaus began his legendary charge at 15. After hitting his 204-yard approach to 12 feet, he buried the putt for eagle to pull within two shots of Ballesteros. Nicklaus then hit his tee shot on 16 to within 3 feet and after holing his birdie putt he was within 1 shot of Ballesteros who was playing the 15th hole. Ballesteros, who was in prime position to go for the green in 2, pull hooked his approach into the water. After failing to get up and down Ballesteros bogeyed the hole, giving Nicklaus a share of the lead. Kite made birdie at 15 to force a three-way tie with Ballesteros and Nicklaus. After a wayward drive Nicklaus hit his approach on 17 to 18 feet. After long deliberation Nicklaus holed his putt on 17 for sole possession of the lead for the first time in the tournament. Nicklaus two-putted for par on 18 to post –9 and a one shot lead.

Ballesteros three-putted the 17th to fall out of contention, but Kite had 12 feet for birdie on 18 to tie Nicklaus in the clubhouse. Kite barely missed his putt on the high side to miss a playoff by one shot. Norman, left for dead after his double on 10, birdied 14, 15 and 16 to pull within one shot of the lead. After hooking his drive way left on 17, Norman made an incredible shot between two pines to within 8 feet. Norman buried the birdie putt, his fourth straight, to tie for the lead. Norman hit a perfect drive on 18, needing birdie for his first major championship. However, Norman pushed his approach shot into the gallery and missed his 15-foot (4.6 m) par putt. Nicklaus had stormed back, shooting 30 on the back 9, to win his 6th Masters title and became the oldest Masters champion at age 46.