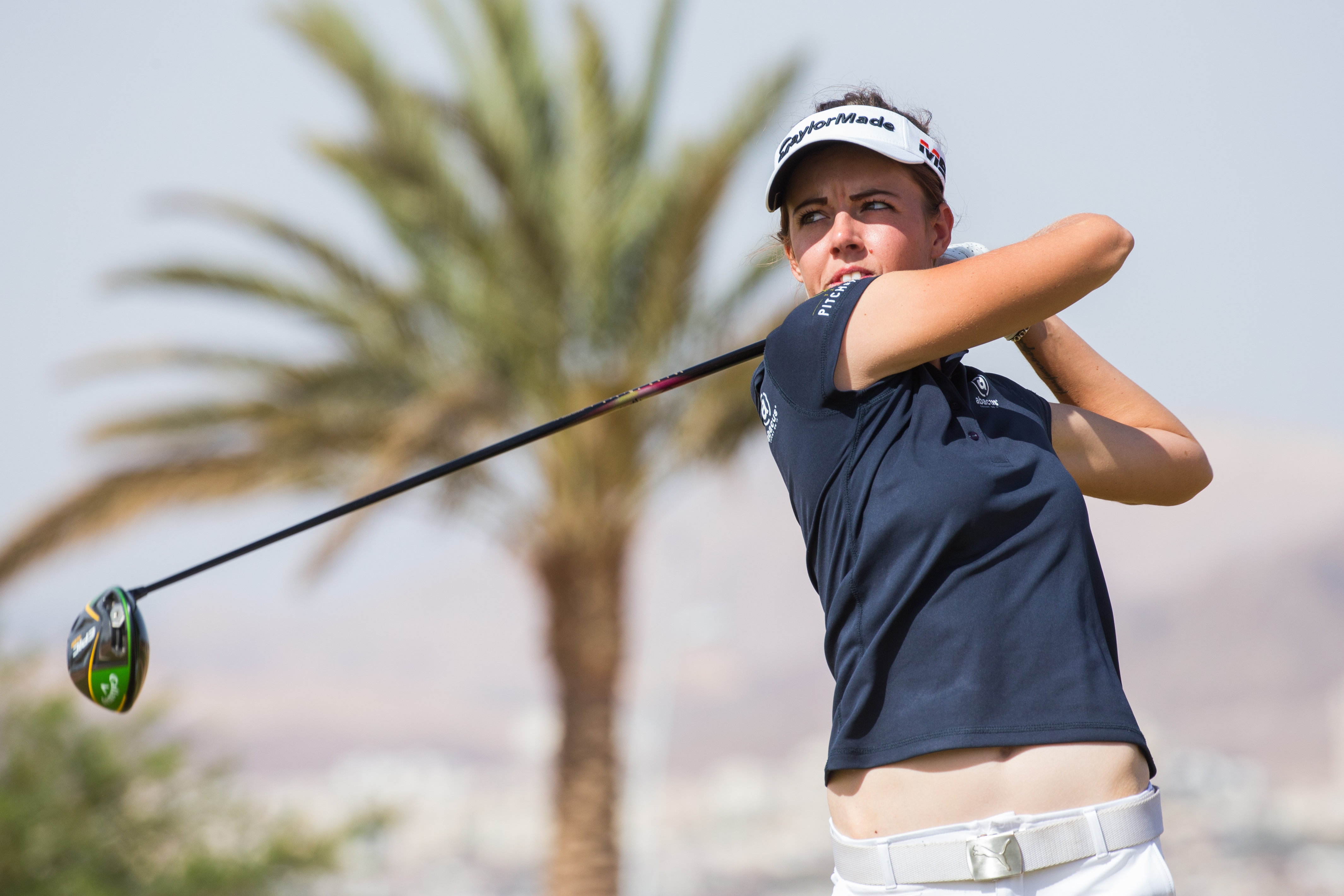 Wellingboro’s Meghan MacLaren, who shot a superb 65 in the first round of the Jordan Mixed Open, at Ayla Golf Club. Picture by TRISTAN JONES

DAAN Huizing will forever hold a small place in history as the first overnight leader of the Jordan Mixed Open on eight-under par – but it was the LET’s Meghan MacLaren who did the most to make the unique format an instant success.

The Dutchman birdied half of the holes at Ayla Golf Club against only one bogey to card an opening round of 64.

The first day at the Jordan Mixed saw the first use in the world of a format allowing men, women and senior golfers to compete in the same field.

MacLaren, who has been a vocal advocate for the strength of the women’s professional game, wasted no time in backing up her words.

She carded birdies on her first two holes and rode the momentum to post the early target of seven-under.

When the high winds forecast for the afternoon failed to materialise, several players, including Huizing, Senior and 2018 Staysure Tour Rookie of the Year Paul Streeter took advantage.

She said: “If I’m going to write about it and talk about it all the time, then I’d better back it up with my golf.

“I’m delighted to do it in this tournament, particularly. Hopefully it will send a bit of a message.

“But any time you shoot seven-under in a tournament, you’re not going to be too far off the lead. Hopefully this means a few more people will be watching.

“Given everything I’ve talked about over the last few months, it is nice to back it up. But I didn’t want to put any extra pressure on myself. I’ve been saying to everybody that the girls’ standard of play will show if the course is set up properly.

“I’m just happy with how I’ve played and if that puts me near the top against the guys, then that’s just a bonus, really.” 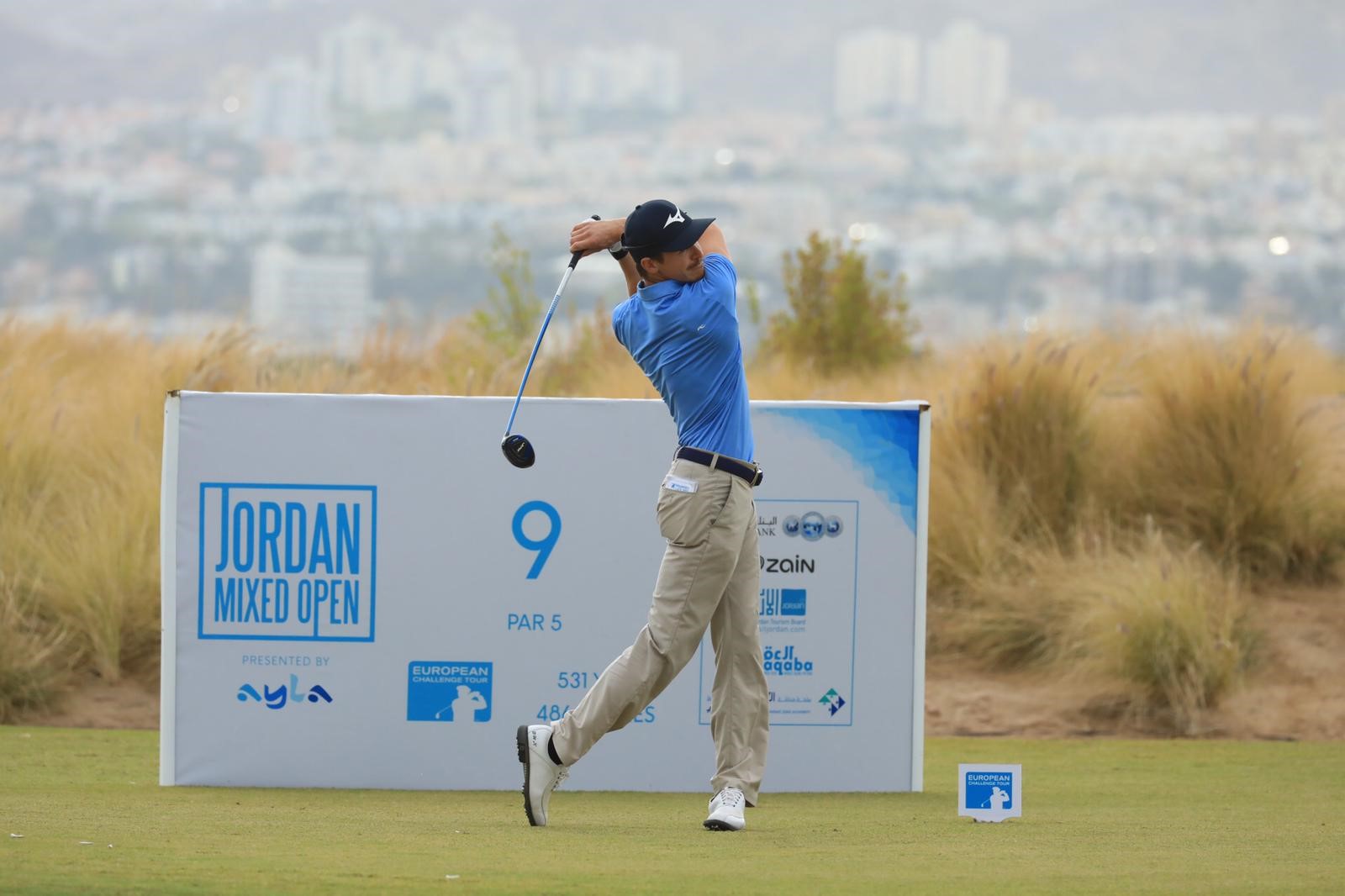 Dutchman Daan Huzing tees off at the par five ninth in the first round of the Jordan Mixed Open, at Ayla Golf Club. Picture by GETTY IMAGES

Huizing, who won the Lythan Trophy and St Andrews Links Trophy in 2012 before turning pro after playing in his second Eisenhower Trophy at that year’s World Amateur Team Championship, in Turkey, said: “It was a really nice round. I was hitting it nicely and made some nice putts to keep the round going as well.

“I enjoyed it. It was pretty chilled and it was good fun,” added the two-time winner on the Challenge Tour, whose victories both in his maiden season in 2013.

“It’s a different perspective to play with the seniors and play with the ladies. It was a nice, relaxed day, and I think being relaxed helped me play well.

“It will be interesting to see after three days what the findings are, but it was fun.

“We never see the seniors or the ladies because the tournaments are never together, and to hear what they do and how their Tours are, it’s good for us to hear because we normally just see the same guys every week.”

Streeter’s six-under 66 was the low-round among the over-50s contingent and placed the Lincoln golfer firmly in the mix with two rounds to go.

He said: “It was brilliant out there. I really enjoyed it. I think the tees were fairly good and I think we were very close to each other on most holes.

“A few were different but that also depends on how you strike it and the slopes you land on, but it seemed to work really well. It’s a great format and it’s something new for everybody.”

Senior, from Lancashire was also happy with his day’s work, saying: “I think you’ve got to enjoy this format, but it’s hard to know how it’s all going to pan out at the end of the week.

“I’m sure, though, that it will be a successful event and continue to be.”

The innovative tournament sees 40 players from each of the Challenge Tour, the over-50s Staysure Tour and the Ladies European Tour compete for the same trophy over 54 holes.

With the golfing community eager to see how the course set-up would play out, the opening round of the Jordan Mixed Open was a great success with players from all three Tours in contention and well-represented inside the projected cut line of even par.

The unofficial battle for low-couple is heating up with LET Order of Merit leader Marianne Skarpnord and her fiancée, Challenge Tour player Richard Green, combining for a two-under total, while married golfers Kyle Henry of the Ladies European Tour and Scott Henry of the Challenge Tour combined for a one-over total.

Mr Henry said: “I’m sure something along these lines would be great for both the guys and the girls.

“It’s been exciting, it’s been a definite atmosphere for all of us. It’s been good fun and its definitely something where a format along these lines is good for everybody.”

And Mrs Henry, who was prepared to wager some household chores on who would come out on top, added: “It’s been a really fun week and it’s just nice to be at a tournament together because usually the Tours are in different countries and sometimes different continents.

“Scott knew the course quite well, and I didn’t manage to get a practice round, so he was really good at giving me a few tips here and there on how to play the course smartly.”

Tournament officials collected data on driving distance, approach shot distance and club selection from every player who competed on day one and will incorporate their findings into the course set-up for Day Two to continue to ensure the fairest possible playing field for all competitors.

The second round of the Jordan Mixed Open presented by Ayla will begin tomorrow at 7:30 am local time before the 123-player field is reduced to the top 60 players and ties for the final day.