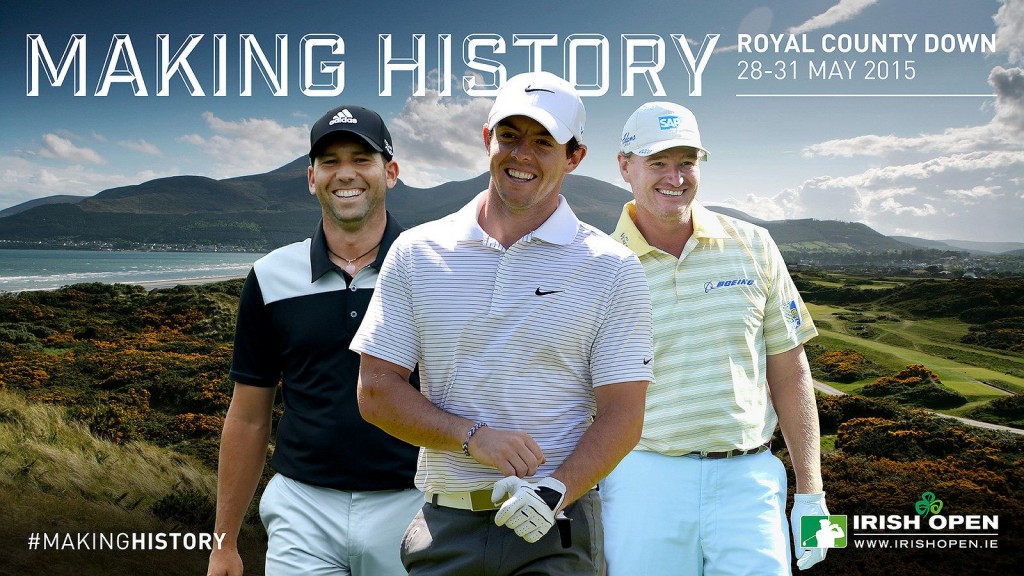 One of the strongest fields in Irish Open history including world number one Rory McIlroy and new European Ryder Cup captain Darren Clarke is set to compete at this year’s event as the tournament prepares to return to the world-famous links at Royal County Down after a 75-year absence.

The event is set to attract global attention when it is held on Northern Ireland’s top-ranked course from May 28-31, with home favourite McIlroy leading a star-studded cast of some of the world’s best players.

McIlroy, whose charitable organisation The Rory Foundation will be the official tournament host this year, has played a pivotal role in attracting some of the biggest names in world golf to the County Down venue, with American ace Rickie Fowler, four-time Major winner Ernie Els and European Ryder Cup stars Sergio Garcia and Lee Westwood among the players to have already confirmed their attendance.

Joining them in Northern Ireland will be defending champion Mikko Ilonen and home favourites Clarke and Graeme McDowell, and many of the game’s other top stars are also expected to play in one of the most popular tournaments on the European Tour calendar.

A European Tour record crowd of 112,000 flocked to see Jamie Donaldson win at Royal Portrush when the Irish Open was last held in Northern Ireland in 2012 and this year’s event is set to be just as popular, with tens of thousands of tickets already having been sold and organisers expecting more than 80,000 spectators.

David Boyce, head of sports tourism for Tourism Ireland, said: “The attendance figures were amazing when the Irish Open was last played in Northern Ireland three years ago and we’re expecting a similar response this year.

“Seeing the likes of Rory McIlroy, Darren Clarke and Sergio Garcia test themselves on one of golf’s most iconic venues promises to be one of the golfing highlights of the year, and the tournament is an ideal way to showcase Northern Ireland as one of the world’s top global golfing destinations.”

Garcia won the Irish Open as a teenager in 1999 and will be making his first appearance in the tournament for 15 years, while South African star Els will be returning after a 17-year absence.

Garcia, 35, said: “I cannot wait to return to a tournament which has such great memories for me. You could say this event is where it all began for me. I was just 19 when I won in Druids Glen in 1999, only two months after I turned professional.

“Not only am I returning to a very special event, but to a venue of which I have heard some incredible things. Royal County Down is a world-famous links and going by what Rory has been telling me, it could possibly be the best course I play this year.

“I feel like I have a great connection with the Irish golf fans, not only from my victory back in 1999 but also from The 2006 Ryder Cup at The K Club. They are knowledgeable and respectful and also good fun so it is going to be a great week.”

Els said: “I haven’t played in the Irish Open for a while and I spoke with Rory in Dubai recently about the event and am very happy for him that he is involved in hosting such a prestigious event. It is a similar role I have taken with the South African Open and it is a great honour to be able to host your national open.

“I was at Royal County Down with my dad and a friend in 1998 and remember the course well. It has such great history and is probably in my top five links courses in the world. I am excited to play and I think the decision to host such a prestigious national open on such a great course is the correct one.”

People wishing to watch the action first-hand at Royal County Down can purchase tickets by going to www.irishopen.ie . Tickets cost between £30 and £35 per day and children under the age of 16 will be admitted free when they are accompanied by an adult (up to four children are allowed with one paying adult).

Corporate hospitality packages are also available for the event at a cost of £300 plus VAT per person.  Already sold out on Friday May 29, these exclusive tickets include course admission with reserved grandstand seat on the 18th green, an official programme, reserved VIP parking (for one or two people), and extensive hospitality in the neighbouring Slieve Donard Hotel – including breakfast followed by a champagne reception, a buffet lunch served with fine wines, afternoon tea and a complimentary bar.

For more details on the 2015 Irish Open and to purchase tickets, visit www.irishopen.ie . For further information about playing golf in Ireland, go to www.ireland.com/golf