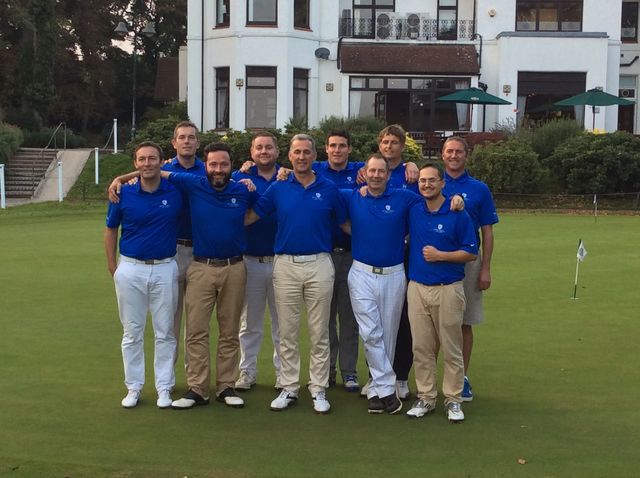 This prestigious Competition has been running since 1948 and Hever have now won it 3 times in the last 5 years!

At the final, held at Shooters Hill Golf Club on Saturday 3rd October, Hever won the North Kent trophy for the third time in five years with a 3 ½ to 1 ½ win over Tunbridge Wells.

First pair out, Steve Whittaker jnr and Rob Stevenson, led the way by securing an excellent 5 and 4 win, followed by Rob Crawley and Paul Watson who went 2 up after three holes and never looked back, winning 3 and 2 to give us a 2 – 0 lead.

With our last pair out, David Hawes-Gatt and John Twiggs, struggling for form and eventually losing 5 and 4, a turnaround was needed. Darren McLean and Lewis Cains were 2 down with four to play as were  Anthony Knott and Dave Dunlop, so things weren’t looking quite so good.

Darren and Lewis then won three holes in a row to go one up and needed a half up the last to win their match and secure the trophy for Hever. With pretty much all of the rest of the team and some loyal supporters watching (Many thanks to Vice Captain Martin and to Sharon and Clara) Lewis creamed a three wood, leaving Darren around 100 yards in to a tricky two tier 18th green. Darren hit a nice shot in to around 20 feet, but on the same level as the hole. The opposition then chipped on to the green after their 14 handicapper had hit a monster drive within around 60 yards, but the chip ended up on the wrong tier leaving a tricky putt down over the ridge of the green.

Lewis putted first and left it within around 2 feet, not quite gimmee length (especially on the recently treated greens). Tunbridge Wells were left with their tricky downhill putt to halve the match and although he got the pace exactly right, the ball faded slightly off to the right, leaving them 6 inches away and a conceded putt.

Darren stepped up and with nerves of steel, sunk the putt to confirm their win and a win for the team.

Anthony and Dave had also fought back to level their match and gain a well deserved half, so all in all a great result for Hever!

So, our competitive season finished on a high after the disappointment of missing out on winning the Invicta league, falling short by just two points, but gaining a creditable second place behind the champions Redlibbets.

In all, 24 players played for the club in competitive matches this year, with some new and some not so new to the teams.

Many thanks to all of the following who played this year:

In particular, many thanks to the selection committee, Steve Whittaker jnr, Rob Stevenson and Mike Swan, for their support and time.