Enjoy Outstanding Castles & Courses with a Golf Break in Kent

Enjoy Outstanding Castles & Courses with a Golf Break in Kent

Royal Cinque Ports, Deal is one of the finest golf courses in Kent and in the World. Host to The Open in 1909 and 1920.

Kent, England, May 2016; Golf in Kent is offering golfers an outstanding Castles & Courses Tour of the Garden of England that combines some stunning golf courses – two of which have royal status – with outings to some of the most striking castles in the country.

Any golfer making a trip to Kent’s east coast will be spoilt for choice when it comes to spectacular golf thanks to its fine collection of championship links overlooking the English Channel.

Royal St George’s, founded in 1887 and laid out by William Laidlaw Purves, is recognized as one of England’s top golf courses. Testament to the quality of this championship links, Royal St George’s has hosted The Open Championship on 14 occasions, most recently in 2011 and remains on the current Open venue roster.

Neighbouring Prince’s Golf Club comprises of three excellent nines and is an ideal place to spend the night with its golf-focused facilities and stunning views across the sea.

Further down the coast you will find Royal Cinque Ports, another stunning championship links and Open Championship host in 1909 and 1920. Regarded by many as one of the finest links in the world, Deal (as it is often referred to) has been home of the Halford Hewitt, the largest amateur tournament in the world, since 1924.

To the north of this magnificent links trio lies the clifftop course at North Foreland which boasts spectacular views of the iconic White Cliffs and English Channel from every hole. This fine championship course’s broad fairways disguise a tricky layout thanks to strategically-placed bunkers that lie in wait. 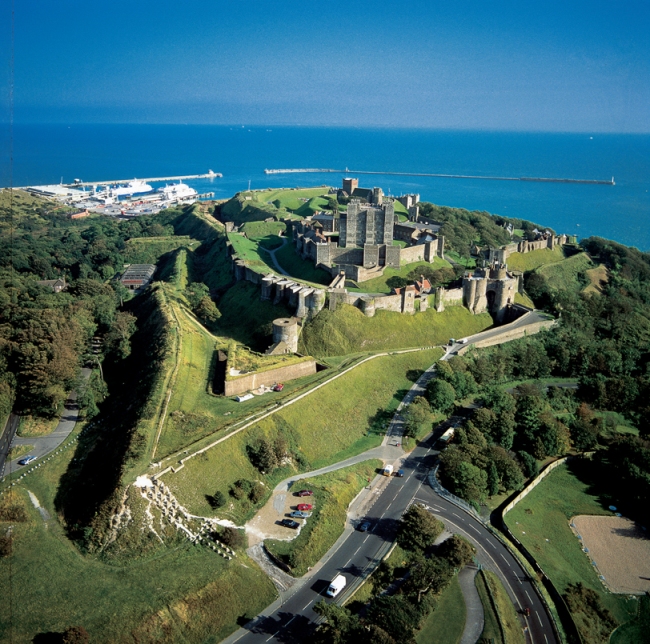 In between rounds, take time out to visit one of the most famous fortresses in the world – Dover Castle. Founded in the 11th century, Dover Castle is perched on the iconic White Cliffs and has been described as the ‘Key to England’ due to its strategic defensive position over the centuries. Visitors can explore the Great Keep or head underground into the historic wartime tunnels where WWII military Operation Dynamo was masterminded.

Both Walmer and Deal Castles are also close by and form part of the historic Cinque Ports defences, built by former monarchs to guard the shore of England. Her Majesty Queen Elizabeth the Queen Mother was a regular visitor in her role as Lord Warden of the Cinque Ports.

For more coastal golf, head to Littlestone (another of Kent’s championship links gems) just outside Romney Marsh or visit Etchinghill, a typical Kent course set in stunning, downland countryside that poses a demanding challenge to golfers of all ages and abilities.

Then you can make your way into the Kent countryside to visit one of Kent’s most famous castles, the romantic and magnificent Hever Castle.  Once the childhood home of Anne Boleyn, it now boasts a stunning parkland golf course in the Hever Estate, thanks to a more recent owner, William Waldorf Astor. You can also enjoy an overnight stay at the castle’s stunning 5-star B&B accommodation in the Astor Wing, with luxurious furnishings and the castle grounds exclusively yours at night.

Not far away lies Leeds Castle, known as “the loveliest castle in the world”, which is surrounded by a picturesque moat and charming nine-hole golf course that was built in 1924 in the 500 acres of estate woodland.

More golf awaits at the Tudor Park Marriott Hotel & Country Club, a short distance from Leeds Castle. This majestic parkland golf course was designed by Donald Steel, one of Britain’s finest course architects. It is an exhilarating showcase of his skills with 6,085 yards of beautifully varied holes set against this picturesque corner of Kent.

Round off your stay with a visit to Lullingstone Castle in the north west, which dates back to the 15th century and whose former silk farm produced the silk for Queen Elizabeth’s coronation robes. Nearby Lullingstone Park is another picturesque parkland course that has magnificent views of the castle whilst nearby the London Golf Club has two 18 hole layouts, The International and The Heritage designed by Jack Nicklaus. Both are pure downland courses that, interestingly, demand a links-style approach.

Before heading home, Hand Picked Hotel’s Brandshatch Place Hotel & Spa is the ideal place to enjoy a little bit of R&R or relax in the comfortable accommodation of a Shepherd Neame hotel or inn after this grand tour of Kent’s Castles & Courses.

For further information about Kent’s golf courses, go to www.golfinkent.co.uk, and for its castles, go to http://www.visitkent.co.uk/things-to-do/heritage-and-gardens/castles-in-kent or to book Castles & Courses golf breaks, email info@golfinkent.co.uk.