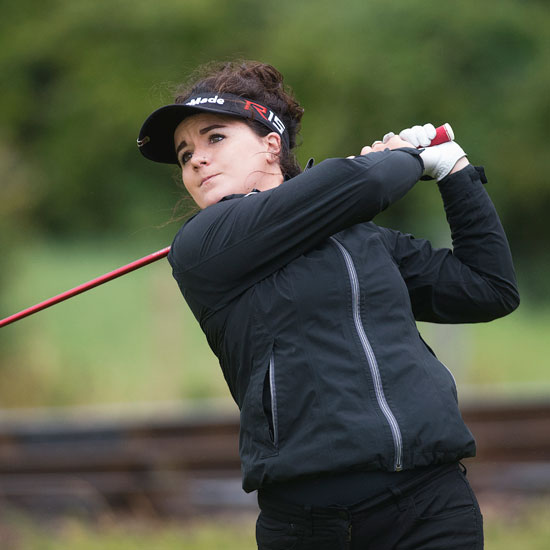 Hampshire’s Emma Allen defied strong winds to shoot a superb seven-under par 66 at Sheringham to take a four shot lead on the first day of the English girls’ championship.

Along the north Norfolk coast at Royal Cromer, 16-year-old Cloe Frankish also beat par, scoring one-under 73 to take the lead in the English U16 girls’.

Meanwhile, England Golf U16 squad player, Morgan Thomas of Staffordshire, leads the U14 championship on one-over par 75 at Royal Cromer.

They led an impressive display of scoring on a tough day when gusting winds were estimated to make up to four clubs’ difference on a shot. Surrey’s Lizzie Prior was three-under at Sheringham, while Cornwall’s Emily Toy was two-under.

Allen, 18, (Image © Leaderboard Photography) had a bogey-free round with three birdies on the way out and an eagle and two birdies on the homeward half. It’s her lowest score in competition and she said: “I’m so happy, over the moon, it’s a great start.

“I was pretty steady and I think I only missed one green,” she added. Allen (Meon Valley) won the Sir Henry Cooper Junior Masters last month and was 14th in the recent English women’s amateur at Hunstanton. She will represent England in next week’s Girls’ Home Internationals before leaving for the USA to study at the University of Missouri.

Prior, another girl international, was joint-runner up in the women’s amateur and has clearly kept her form going. She had six birdies in her round, including a run of three from the eighth and a pair on the last two holes.

“It was so windy but I kept the ball quite straight off the tee, that was probably the best part of my game,” said the 17-year-old from Burhill.

Emily Toy, 17, (Carlyon Bay) was another player with a bogey free round, combining 16 pars with birdies on the long 10th and the par four 16th.

At Royal Cromer, Cloe Frankish (Chart Hills) was in the first group out and, after a 15-minute weather delay, set an unbeatable target for the day with her score of one-under 73.

She had an up and down start to the round and didn’t score her first par until the eighth. At that stage she was one-over, having had three birdies and four bogeys, and she went on to play the rest of the course in two-under, with birdies on 10 and 12.

“I wasn’t playing very well to start with but having that par on the eighth made a difference. I hit a really good second shot but it spun back off the green and I had to hole an eight-foot putt for par.”

Frankish, who won last week’s Scottish U21 championship, added: “I felt I left quite a lot out there but I’m pleased with that score in the wind.”

She leads by two shots from Yorkshire’s Olivia Hamilton (Cleckheaton & District) and by three from a group of six players which includes 2014 English U15 champion Emily Price (Cleobury Mortimer).

The U14 championship is led by Morgan Thomas (Beau Desert) who shot one-over 75 and is a stroke ahead of another England Golf U6 squad player, Lily Humphreys of Channels, Essex. Third place is currently held by Magdalena Cervinkova of the Czech Republic on three-over.

Thomas, 14, had five birdies in her round, reaching the turn in one-over and coming home in level par.