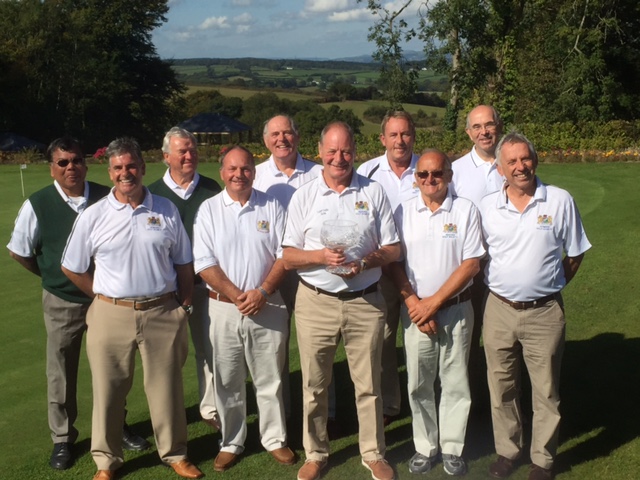 64 four teams from all over South Wales entered this year’s South Wales Seniors Classic, a knockout competition being held for the 12th time in aid of the South Wales Air Ambulance Service.

The South Wales Seniors Classic (SWSC) was established in 2004 with Max Boyce as its President and has raised £66,000.00 for the charity with a cheque for £7000.00 being handed over at the finals presentation dinner held recently at The Grove Golf Club. Earlier in the day the Cottrell Park team of Jon Owen & Edwin Yhap, George Duncanson & Alan Gregson and Eric Fortt & Steve Charlton defeated Haverfordwest ‘B’ 2 matches to 1 in the Bowl Competition Final, sweet revenge since Haverfordwest ‘A’ had beaten Cottrell 2:1 on their course in the preliminary round of the competition after which the 32 winners contest the SWSC Cup and the 32 losers the SWSC Bowl.

The Cottrell Park squad which also included Ben Davies, Bruce Rankine, Gareth Gambling, Ray Reakes and Steve Cross (all of whom played at some point in the lead up to the final) beat in Round1: Alice Springs ‘B’, Round 2: Pontypridd ‘A’, Quarter Final: Alice Springs ‘B’ and in the Semi Final: Llanishen ‘B’

Incidentally, Llanishen ‘A’ made it a ‘Cardiff Double’ when they defeated GlynHir to take the SWSC Cup Final.

Some years ago Woodlake Park Golf Club Seniors Society thought it would round off the season nicely if they brought together all the teams on their social match fixture list and thus was established ‘The Challenge’ The 9 teams, each with 8 players; Cottrell Park, Woodlake Park, Wenvoe Castle, Alice Springs, Morlais Castle, Raglan Parc, The Herefordshire, Forest of Dean and South Herefordshire play individual Stableford with the best six scores in each team to count.

The event was hosted this year by Alice Springs, not an easy course, and on the day the course won! Of the 72 cards posted only 7 were 30 points or better and 3 of those were Cottrell Park; Steve Cross 30, David Stephenson 32 and Gregor Munro 33 and with a team total of 175 the trophy was won by Cottrell Park with David Stephenson taking 3rd place and Gregor Munro declared the winner after countback. Other Cottrell Park team members included Bill Aspinall, Ben Davies, Les Fair, John Lloyd and Chris Stanlake.