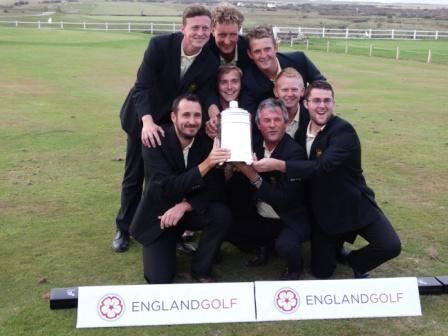 Cornwall achieved their greatest ever golfing success yesterday when they claimed the title of English Men’s County Champions after three days of gruelling competitive golf over the ancient links of Royal North Devon GC. The county won the title for the first time in it’s 113-year history. The milestone was achieved when the Cornish beat Surrey 5.5 – 3.5 in the final series of matches.

On yet another surprisingly benign day that started with the possibility the title could go in one of three directions Cornwall knew due to their previous two days and unbeaten status, that a win over Surrey would secure the title outright. On the day if Surrey had turned the tables then Yorkshire would have secured their 21st title. In the end the Yorkshiremen had to settle for second spot despite a 5-4 win over wooden spoonists Warwickshire.

County Captain Richard Simmon’s Duchy team however ground out a tenacious performance to secure the trophy and the foundations for this were laid in the morning’s three foursomes.

Simmons despatched his team onto the course against Surrey in an unchanged order. The pairing of Conor Wilson and Matt Richards, who had struggled the previous day, ignited as they ran away to a convincing 6&4 victory to record the first points on the board. Wilson and Richards started well with a winning birdie at the first and they went 2up after three holes. When they claimed 7 with a par the lead was extended and by the turn they had made it 4. They remained in that position until 13 where a birdie saw them go 5 up and when their opponents Mark Booker and Andrew Devonport bogeyed the par 3 14th the match was over.

The back match also went the way of Cornwall as Harry Hall and Rob MacGregor recorded a 2&1 win over Kieran Lovelock and Simon Crockett in a game pitted with birdies. At the turn the match was all square but ‘H’ and ‘Big Mac’ went 2 up after 11 and never relinquished that position.

It was in the top game where Tom Fox and Joe cruse faced Surrey’s Oscar Granstrom-Livesey and David Corben that Cornwall gained a significant boost to their challenge. The Surrey pair were generally in control over the front nine and never down but Fox and Cruse stuck to the task and were level at the turn.

The Surrey pair regained the lead at ten and went 2up again with a par at 14 only to lose 15. A birdie-two at 16 saw them two ahead again but the very determined Fox and Cruse finished birdie-par to snatch a vital half which meant the team would have to gain 2.5 points from the afternoon 6 singles to claim victory in the match and the Championship tag.

Simmons changed the order of his team for the singles sending Hall out first against Granstrom-Livesey. Hall duly delivered after a tight battle coming from behind with a fine 3&1 victory and when the resurgent Wilson romped home 6&4 against Devonport, with successive birdies at 7, 8 and 9 the excitement was building although with news of the other matches on the course it was by no means a foregone conclusion. Cornwall was on the verge of victory but a tie with Surrey meant they could still be caught by Yorkshire on games totals and still needed a half point.

MacGregor was up early in his match against Booker but with Richards, Cruse and Fox all down and MacGregor pegged back to all square the sum total meant a nervous time for the supporting onlookers.

MacGregor who at the turn had been 3up lost 3 holes in a row and was pegged right back by Booker who was putting brilliantly. The latter took the lead with excellent birdies at 15 and 16. A half at 17 meant MacGregor strode to the final tee one down. He hit arguably his best drive of the week leaving a short pitch across the ditch to the 18th green. Booker, from further back came up onto the front of the green with the pin back left. MacGregor then struck a sweet wedge to some 15 feet in front of a gathering crowd of players and spectators. Booker putted well to a close distance but the stage was set for MacGregor to claim the vital half point. The ‘Giant Man’ did not disappoint as he rolled in his putt to spark celebrations.

Richards after a fightback eventually lost his match 3&1 to David Corben and Fox was beaten 3&2 by Kieran Lovelock but Joe Cruse gained another half point for Cornwall in his game with Simon Crockett.

Simmons paid tribute to his team as well as the opponents faced in what had been an exciting 3 days.

“This seems like a dream,” said Cornwall captain Richard Simmons. “We have created a piece of history and it is the beginning of an era. This is incredible for Cornwall, a county with only 34 clubs.

“Not long ago we didn’t have a team that could go out and do this. It was so fitting that Rob MacGregor holed the winning putt. He’s had a couple of difficult years but has come back into the team and the big man is an inspiration.”

Cornwall’s maiden victory means the title has been won by a south west county three times in the last four years following Wiltshire’s back-to-back championships in 2011 and 2012. Having arrived at the start of the event to see the Cornish flag hanging above the other county flags at the top of RND’s mast was perhaps a lucky omen along with the knowledge the regional qualifier had been won over the same ground in June. The players had also played at RND in the clubs prestigious Kashmir Cup event as part of preparation for the finals.

“We are quite familiar with this course,” added Simmons. “It was great to win here to get to the finals but the conditions on that occasion were horrendous. It took 13 hours to finish the medal round and it was reduced to 18 holes. It was great to win in much kinder conditions.”

With the prize presentation complete the celebrations began in earnest.

Reflecting further on the week Simmons said, ‘We had a great time here in June and rented a house for our entire team. The bonding that took place then set this victory up and coming into the event I had no doubt the boys were capable of winning. We rented again this time and have had the same excellent team spirit. I haven’t had to motivate the boys too much at all. They are a great unit who play for each other and this victory is richly deserved for them. Winning the Channel League last year was a start but now we have delivered on a national stage and for a small county this is exceptional.

He paid tribute to the county’s sponsors Ocean BMW and TMS Financial Ltd. ‘Without the sponsorship things would have been so much harder and we are very grateful to both for their support of golf in the county. Ocean’s Anthony Scrivener was able to join us on Friday and actually carried Foxy’s bag on Saturday when he was able to witness first hand some excellent golf and to get to know the team. The boys really appreciated that’.

The icing on this particular cake may yet be that the Duchy claim the Channel League title to boot as next weekend sees the final round robin match with Glamorgan needing an exceptional points victory over Gloucestershire to overhaul Cornwall at the top of the table.

Amateur golf in the county is currently in a richly deserved strongest position ever and County President David Inch was delighted. He said, ‘Winning the English County Finals is a magnificent achievement and after a lot of hard work, the team have done the county and themselves proud. I am honoured to be President and this has been an experience I and those associated with golf in Cornwall will never forget. We are firmly on the map and now we have to try and build on that.’