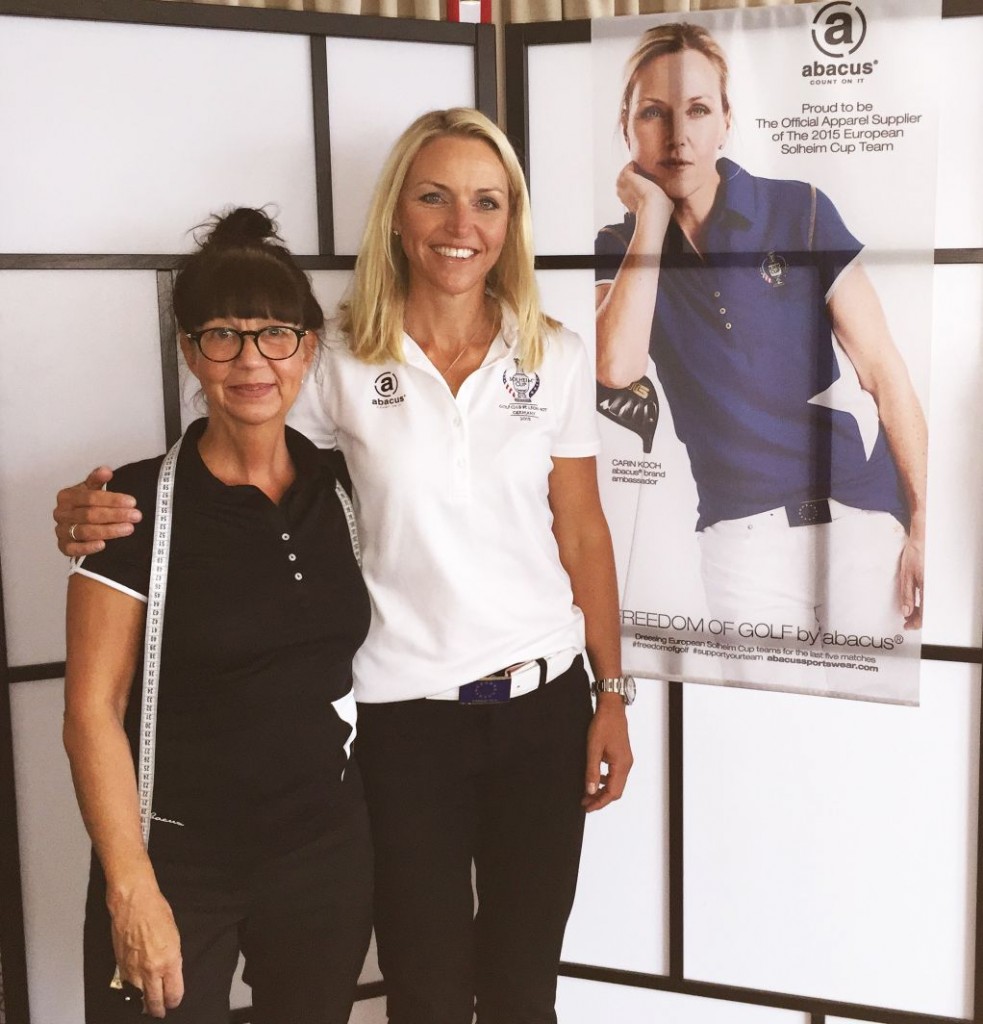 (Dalby, Sweden – August 11, 2015) As qualifying for The 2015 Solheim Cup enters the closing stages, the top ranked players from the current European standings were fitted for their outfits by the team’s Official Apparel Supplier, Abacus Sportswear, ahead of the Ricoh Women’s British Open at Trump Turnberry, Scotland.

The prospective team members were invited to an individual fitting session with abacus® Head Seamstress, Lisa Martell Nielsen, who put the final touches to the practice and match day outfits that will be worn by the team at Golf Club St. Leon-Rot in Germany, this September.

During the fitting session, the Saturday outfits attracted a lot of attention, with players looking forward to wearing pink for the first time ever at a Solheim Cup event. The cobalt blue tops set to be worn on the final day, also proved very popular with the players, who will know whether they have made the team when European Captain Carin Koch officially announces her four picks on August 25.

Commenting on the design nuances included within the collection, Carin Koch said: “I think the European team is always very stylish on the course and I would like to think that this year will be no different.

“There are little touches within this collection that I have worked alongside abacus® to develop, which will hopefully help create that positive mindset for the players. I was also very keen to incorporate pink into the clothing design as a fresh, feminine colour, so the begonia we use for the Saturday outfit is a first for the Solheim Cup and it was pleasing to hear the positive feedback it received from the players.”

Included in the collection will be the company’s new Pitch Extreme StretchLite™ jacket, which makes its first appearance at The 2015 Solheim Cup. The garment is the lightest, most breathable waterproof the company has produced and features a membrane technology enabling it to be worn close to the skin without a separate lining. This ensures it is extra light, thin and easy to wear, while its capacity to stretch to almost twice its original size enables complete freedom of movement on the course.

Carin continued: “The knowledge everyone at Abacus Sportswear has when it comes to developing high-performance team wardrobes, along with the level of service it continuously provides, helps ensure all of the team will feel their best when on the course.

“I know from my own experience that when you feel good, you play well and that will hopefully help to give Europe the edge during the competition in Germany.”

A selection of abacus® garments including rain jackets, windwear and moisture wicking Drycool® polo shirts embossed with The Solheim Cup logo are available to purchase from the Official Solheim Cup online store www.solheimcupshop.com. Outfits will also be on sale at the Merchandise Shop at St. Leon-Rot Golf Club, Germany, from September 18-20, 2015.